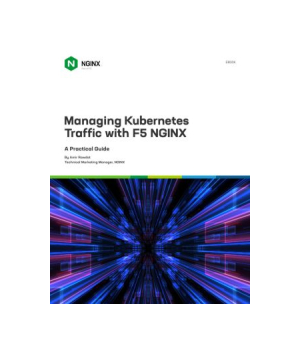 While container-based microservices apps have profoundly changed the way DevOps teams deploy applications, they have also introduced challenges. Kubernetes - the de facto container orchestration platform - is designed to simplify management of containerized apps, but it has its own complexities and a steep learning curve. This is because responsibility for many functions that traditionally run inside an app (security, logging, scaling, and so on) are shifted to the Kubernetes networking fabric.

To manage this complexity, DevOps teams need a data plane that gives them control of Kubernetes networking. The data plane is the key component that connects microservices to end users and each other, and managing it effectively is critical to achieving stability and predictability in an environment where modern apps are evolving constantly.

Ingress controller and service mesh are the two Kubernetes-native technologies that provide the control you need over the data plane. This hands-on guide to F5 NGINX Ingress Controller and F5 NGINX Service Mesh includes thorough explanations, diagrams, and code samples to prepare you to deploy and manage production-grade Kubernetes environments.

Taking Kubernetes from Test to Production

With Kubernetes came many new concepts, particularly around networking and traffic management. Alongside these new concepts were entirely new classes of tools, designed for ephemeral, containerized, and distributed application deployments. In particular, Ingress controllers and service meshes did not exist prior to the Kubernetes era. Nor...

Deploying NGINX as an API Gateway

In this eBook, we tell you how to take an existing NGINX Open Source or F5 NGINX Plus configuration and extend it to manage API traffic as well. When you use NGINX for API management, you tap into the high performance, reliability, robust community support, and expert professional support (for NGINX Plus customers) that NGINX is famous fo...

The aim of this short book is to introduce the general themes, challenges, and opportunities in the world of managing API traffic. Most of the examples and recommendations come from my own experience (or that of colleagues) while working with customers, ranging from small local startups to global enterprises.This book is for those just ge...

In this practical guide, four Kubernetes professionals with deep experience in distributed systems, enterprise application development, and open source will guide you through the process of building applications with this container orchestration system. Based on the experiences of companies that are running Kubernetes in production succes...

Discover how to deliver reliable, high-performance APIs with our NGINX Real-Time API Handbook. Compiled by leading experts on real-time API management, this handbook is a comprehensive guide to reducing latency in your applications and APIs without making any compromises. Learn why now, more than ever, your APIs need to perform in real ti...

Istio is one of the most popular solutions for service meshes in cloud-native infrastructures, and it is most often deployed on Kubernetes clusters. In Istio Succinctly, authors Rahul Rai and Tarun Pabbi provide a practical guide to getting started with Istio, from setting up a Kubernetes cluster, to managing its traffic management, secur...