Documentation from the Source 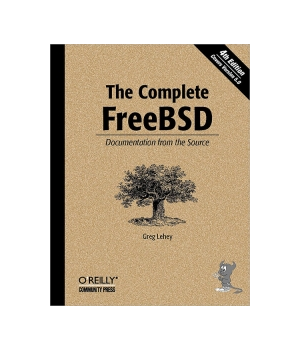 FreeBSD is by far the most popular version of BSD, the legendary operating system that has contributed a great deal to every version of Unix in use today (including Mac OS X). Originally a community effort by the University of California at Berkeley, FreeBSD was aimed at making Unix a little friendlier and easier to use. By the time other free operating systems came along, BSD was firmly established and very reliable. And it continues to be today.

For seven years, the FreeBSD community has relied on Greg Lehey's classic, The Complete FreeBSD, to guide them through its configuration and administration.

HTML &amp; CSS: The Complete Reference, 5th Edition contains full details on CSS 2.1 as well as every proprietary and emerging CSS3 property currently supported. Annotated examples of correct markup and style show you how to use all of these technologies to build impressive Web pages. Helpful appendixes cover the syntax of character e...

Today's complex world of mobile platforms, cloud computing, and ubiquitous data access puts new security demands on every IT professional. Information Security: The Complete Reference, 2nd Edition is the only comprehensive book that offers vendor-neutral details on all aspects of information protection, with an eye toward the evolving thr...

FreeBSD is the muscle behind companies like Netflix and EMC. Any place where someone does heavy lifting on the Internet, you'll find FreeBSD. This newly revised edition of Absolute FreeBSD brings FreeBSD's strengths to bear on your problems and covers FreeBSD's newest features, all in the inimitable style that has made author Michael W. L...

Design a complete Voice over IP (VoIP) or traditional PBX system with Asterisk, even if you have only basic telecommunications knowledge. This bestselling guide makes it easy, with a detailed roadmap that shows you how to install and configure this open source software, whether you're upgrading your existing phone system or starting from ...

by Eric A. Meyer

When you're working with CSS and need a quick answer, CSS Pocket Reference delivers. This handy, concise book provides all of the essential information you need to implement CSS on the fly. Ideal for intermediate to advanced web designers and developers, the 4th edition is revised and updated for CSS3, the latest version of the Cascading ...