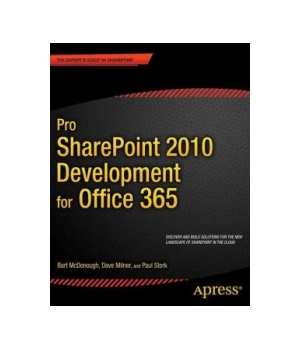 It's no secret that cloud-based computing is the next big movement in IT, and Microsoft is right there in the market with Office 365 - a cloud-based productivity suite which includes a hosted, cloud-focused version of SharePoint 2010.

SharePoint 2010 developers who have traditionally developed for on-premise environments will suddenly find themselves being asked to develop for the cloud. While there is a lot of overlap between cloud-based and traditional SharePoint development, there are also some important differences and considerations that must be taken into account as well. In particular, the proliferation of cloud-based solutions was a driving force behind certain new features in SharePoint 2010, like sandboxed solutions and the new client object model.

Pro Access 2010 Development is a fundamental resource for developing business applications that take advantage of the features of Access 2010 and the many sources of data available to your business. In this book, you'll learn how to build database applications, create Web-based databases, develop macros and Visual Basic for Applicati...

Are you ready to explore the new capabilities of SharePoint 2010 so you can quickly build collaborative solutions that meet your business needs? Written for the .NET developer, this guide shows you how to take advantage of all the new features for creating and upgrading SharePoint sites. Inside you'll find field-tested best practices...

Take your Office 365 skills to the next level. Master PowerShell for Office 365 to stay competitive in today's world of highly sought after cloud management skills. With expert guidance, IT pros will learn how to leverage the muscle of PowerShell to automate many advanced administrative tasks not otherwise accessible in the Office 36...

SharePoint 2010 allows for much more robust branding opportunities and this hands-on resource shares proven techniques for branding and user interface design so that you can execute a successful branding initiative with SharePoint 2010. After a review of branding and how it relates to SharePoint, the book addresses what's new in Shar...

Pro SharePoint 2010 Search gives you expert advice on planning, deploying and customizing searches in SharePoint 2010. Drawing on the authors' extensive experience of working with real-world SharePoint deployments, this book teaches everything you'll need to know to create well-designed SharePoint solutions that always keep the ...

Pro SharePoint 2010 Administration is a practical guide to SharePoint 2010 for intermediate to advanced SharePoint administrators and power users, covering the out-of-the-box feature set and capabilities of Microsoft's collaboration and business productivity platform.Starting with a detailed deployment and initial configuration walkt...