Getting Started with BeagleBone

Bookstore > Books > Getting Started with BeagleBone 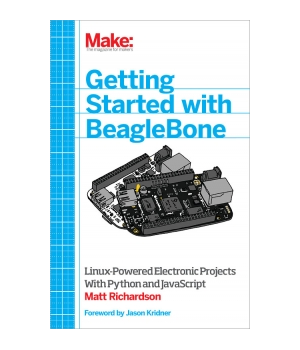 Many people think of Linux as a computer operating system, running on users' desktops and powering servers. But Linux can also be found inside many consumer electronics devices. Whether they're the brains of a cell phone, cable box, or exercise bike, embedded Linux systems blur the distinction between computer and device.

Many makers love microcontroller platforms such as Arduino, but as the complexity increases in their projects, they need more power for applications, such as computer vision. The BeagleBone is an embedded Linux board for makers. It's got built-in networking, many inputs and outputs, and a fast processor to handle demanding tasks.

Getting Started with nopCommerce

nopCommerce is a powerful e-commerce engine that gives you the tools to build an online store and start making money. Starting your own e-commerce store can seem like a daunting task. However, with nopCommerce you can easily start selling products online in no time. nopCommerce comes loaded with everything you need to run a first class e-...

Getting Started with LLVM Core Libraries

LLVM is a bleeding edge compiler technology framework. Easily extendable and designed as a multitude of libraries, LLVM provides a smooth experience for compiler newcomers and reduces the steep learning curve often associated with compiler development.To start, this book will show you how to configure, build, and install LLVM libraries, t...

Flight is a lightweight, component-based JavaScript application framework developed by Twitter for Twitter.com. It is an exciting alternative to the complexities of modern MVVM frameworks, offering a minimal API that allows you to write fast, reliable, scalable applications with a minimum of boilerplate code.Getting Started with Twitter F...

Getting Started with Beautiful Soup

Beautiful Soup is a Python library designed for quick turnaround projects like screen-scraping. Beautiful Soup provides a few simple methods and Pythonic idioms for navigating, searching, and modifying a parse tree: a toolkit for dissecting a document and extracting what you need without writing excess code for an application. It doesn't ...

Getting Started with Electronic Projects

Meteor is one of the most popular development platforms available today, allowing you to create and deploy mobile and web applications in a fraction of the time needed by other JavaScript frameworks. Getting Started with Meteor.js JavaScript Framework Second Edition is an easy to follow, step-by-step approach to learning how to build mode...

Getting Started with Tableau 2018.x

Tableau is one of the leading business intelligence tools used worldwide, in organizations of every scale. In its latest release, Tableau 2018 promises richer and more useful features related to visual analytics, reporting, dashboarding, and a host of other data visualization aspects. Getting Started with Tableau 2018.x will get you up an...

Getting Started with XenDesktop 7.x