Biting and Humorous Tales of a Software Engineering Manager 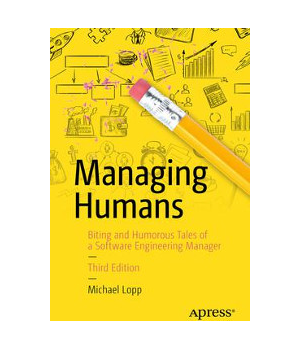 Read hilarious stories with serious lessons that Michael Lopp extracts from his varied and sometimes bizarre experiences as a manager at Apple, Pinterest, Palantir, Netscape, Symantec, Slack, and Borland. Many of the stories first appeared in primitive form in Lopp's perennially popular blog, Rands in Repose. The Third Edition of Managing Humans contains a whole new season of episodes from the ongoing saga of Lopp's adventures in Silicon Valley, together with classic episodes remastered for high fidelity and freshness.

Whether you're an aspiring manager, a current manager, or just wondering what the heck a manager does all day, there is a story in this book that will speak to you - and help you survive and prosper amid the general craziness of dysfunctional bright people caught up in the chase of riches and power. Scattered in repose among these manic misfits are managers, an even stranger breed of people who, through a mystical organizational ritual, have been given power over the futures and the bank accounts of many others.

Lopp's straight-from-the-hip style is unlike that of any other writer on management and leadership. He pulls no punches and tells stories he probably shouldn't. But they are magically instructive and yield Lopp's trenchant insights on leadership that cut to the heart of the matter - whether it's dealing with your boss, handling a slacker, hiring top guns, or seeing a knotty project through to completion.

Writing code is easy. Managing humans is not. You need a book to help you do it, and this is it.

In today's time-crunched, cost-conscious global business environment, tight project deadlines and stringent expectations are the norm. Now with 25% new and updated content, Project Management For Dummies, 3rd Edition introduces you to the principles of successful project management and shows you how to motivate any team to gain maximum pr...

The Linux Network Administrator's Guide, 3rd Edition dispenses all the practical advice you need to join a network. Along with some hardware considerations, this highly acclaimed guide takes an in-depth look at all of the essential networking software that comes with the operating system - including basic infrastructure (TCP/IP, wireless ...

Who can resist the instant gratification of the digital camera? For everyone who owns or will own a digital camera, Derrick Story delivers Digital Photography Pocket Guide, 3rd Edition--the perfect on-the-go guide for taking top-notch digital photos. In full color, this third edition of the bestselling pocket guide covers everything from ...

The 3rd edition of Build Your Own Website the Right Way Using HTML &amp; CSS is the perfect companion to help you accomplish this goal.All you need is a computer with an internet connection and by the end of the book, you'll know how to build the site, obtain some hosting, promote the site, and keep it running once it's live....