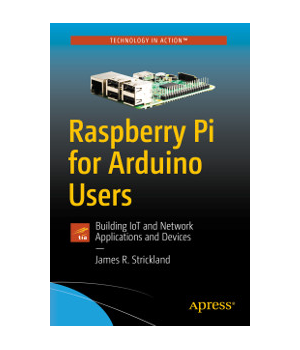 Leverage your Arduino skills in the Raspberry Pi world and see how to cross the two platforms into sophisticated programs.

The Arduino and Raspberry Pi communities overlap more than you might think. Arduinos can be expanded to have network capabilities with a variety of "shields", all of which increase the cost and complexity of the system. By contrast, Raspberry Pis all run Linux, which is a very network-competent platform. The newest Pi, the Raspberry Pi Zero W, is WiFi and Bluetooth capable, and costs around $10 U.S. For network enabled gadgets, it makes far more sense to cross to the Raspberry PI platform, if only someone would make it easy to do. That's what this book is about.

You'll learn some survival level Linux system administration, so you know how to set the machine up and how to establish at least minimal security for your gadget. You'll set up and learn the Geany IDE on your Pi, which is fairly similar to the Arduino IDE.

Where the two platforms overlap the most is the GPIO system. You'll see that several projects use and explain the WiringPi system. This is is deliberately similar to the Arduino's Wiring functionality, which is how sketches interact with GPIO pins. You'll learn the differences between the GPIO pins of the two devices, and how the Pi has some limitations on those pins that the Arduino does not. As a final project, in an effort to escape some of those limitations, you'll attach an AtMEGA 328P to the Raspberry Pi and configure it as a real, 8MHz Arduino with the Arduino IDE running on the Pi, and learn how to have the two platforms communicate, giving you the best of both worlds.

Ever wished you could play around with all the neat gadgets your favorite spies use (like James Bond or Michael Westen)? With the introduction of the remarkable Raspberry Pi and a few USB accessories, anybody can now join in on the action.Discover how to turn your Raspberry Pi into a multipurpose secret agent tool! Through a series of fun...

With the invention of the unique credit card-sized single-board computer comes a new wave of hardware geeks, hackers, and hobbyists who are excited about the possibilities with the Raspberry Pi - and this is the perfect guide to get you started. With this down-to-earth book, you'll quickly discover why the Raspberry Pi is in high demand!T...