Commercial and Industrial Internet of Things Applications with the Raspberry Pi 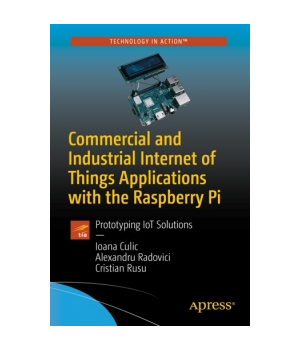 This book presents real-life IoT applications based on the Raspberry Pi, beyond the relatively simplistic demos built for educational purposes or hobbyists. You'll make the transition from tinkering with a couple of sensors and simple devices to building fully developed products for commercial use and industrial systems. You'll also work with sensors and actuators, web technologies used for communications in IoT networks, and the large-scale deployment of IoT software solutions. And see how to design these systems as well as maintain them long term.

See the Raspberry Pi in a new light that highlights the true industrial potential of the device. Move beyond connecting an LED to the Raspberry Pi and making it blink to actually managing a network of IoT devices.

The Internet of Things (IOT) has managed to attract the attention of researchers and tech enthusiasts, since it powerfully combines classical networks with instruments and devices.In Internet of Things Programming Projects, we unleash the power of Raspberry Pi and Python to create engaging projects. In the first part of the book, you'll b...

This book starts by exploring the popular HTTP, UPnP, CoAP, MQTT, and XMPP protocols. You will learn how protocols and patterns can put limitations on network topology and how they affect the direction of communication and the use of firewalls. Thing registries and delegation of trust are introduced as important tools to secure the life c...

We live in an era where advanced automation is used to achieve accurate results. To set up an automation environment, you need to first configure a network that can be accessed anywhere and by any device. This book is a practical guide that helps you discover the technologies and use cases for Industrial Internet of Things (IIOT).Hands-On...

Apply a methodology and practical solutions for monitoring the behavior of the Internet of Things (IoT), industrial control systems (ICS), and other critical network devices with the inexpensive Raspberry Pi. With this book, you will master passive monitoring and detection of aberrant behavior, and learn how to generate early indications ...