Armoring the Foundation of the Platform 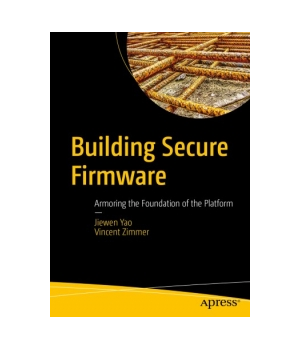 As operating systems and hypervisors have become successively more hardened, malware has moved further down the stack and into firmware. Firmware represents the boundary between hardware and software, and given its persistence, mutability, and opaqueness to today's antivirus scanning technology, it represents an interesting target for attackers.

As platforms are universally network-connected and can contain multiple devices with firmware, and a global supply chain feeds into platform firmware, assurance is critical for consumers, IT enterprises, and governments. This importance is highlighted by emergent requirements such as NIST SP800-193 for firmware resilience and NIST SP800-155 for firmware measurement.

Perimeter defenses guarding your network aren't as secure as you might think. Hosts behind the firewall have no defenses of their own, so when a host in the "trusted" zone is breached, access to your data center is not far behind. This practical book introduces you to the zero trust model, a method that treats all hosts as if th...

Can a system be considered truly reliable if it isn't fundamentally secure? Or can it be considered secure if it's unreliable? Security is crucial to the design and operation of scalable systems in production, as it plays an important part in product quality, performance, and availability. In this book, experts from Google share best prac...

As a Rapid Application Development framework, Oracle Application Express (APEX) allows websites to easily be created based on data within an Oracle database. Using only a web browser, you can develop and deploy professional applications that are both fast and secure. However, as with any website, there is a security risk and threat, and s...

This book covers the necessary concepts you'll need to build useful, rich, secure enterprise apps for mobile devices, and also explains portions of an example enterprise app development so that you have a working demonstration of the concepts in the book.The book focuses heavily on security concepts such as authorization, SSL and certific...

Go is becoming more and more popular as a language for security experts. Its wide use in server and cloud environments, its speed and ease of use, and its evident capabilities for data analysis, have made it a prime choice for developers who need to think about security.Security with Go is the first Golang security book, and it is useful ...

Amazon Web Services (AWS) is currently the leader in the public cloud market. With an increasing global interest in leveraging cloud infrastructure, the AWS Cloud from Amazon offers a cutting-edge platform for architecting, building, and deploying web-scale cloud applications.As more the rate of cloud platform adoption increases, so does ...

With Drupal, Web professionals can create full-featured Web sites with just a few clicks. Drupal's core is compact and well documented, but much of Drupal's immense power lies elsewhere - in external modules. Drupal's Building Blocks is an authoritative tutorial, reference, and cookbook for Drupal's most valuable modules.The authors are D...