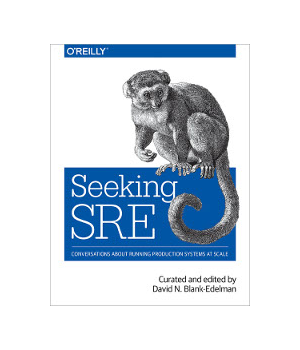 Organizations - big and small - have started to realize just how crucial system and application reliability is to their business. At the same time, they've also learned just how difficult it is to maintain that reliability while iterating at the speed demanded by the marketplace. Site Reliability Engineering (SRE) is a proven approach to this challenge.

SRE is a large and rich topic to discuss. Google led the way with Site Reliability Engineering, the wildly successful O'Reilly book that described Google's creation of the discipline and the implementation that has allowed them to operate at a planetary scale. Inspired by that earlier work, this book explores a very different part of the SRE space.

The more than two dozen chapters in Seeking SRE bring you into some of the important conversations going on in the SRE world right now. Listen as engineers and other leaders in the field discuss different ways of implementing SRE and SRE principles in a wide variety of settings; how SRE relates to other approaches like DevOps; the specialities on the cutting edge that will soon be common place in SRE; best practices and technologies that make practicing SRE easier; and finally hear what people have to say about the important, but rarely discussed human side of SRE.

In 2016, Google's Site Reliability Engineering book ignited an industry discussion on what it means to run production services today - and why reliability considerations are fundamental to service design. Now, Google engineers who worked on that bestseller introduce The Site Reliability Workbook, a hands-on companion that uses concrete ex...

Real-World SRE is the go-to survival guide for the software developer in the middle of catastrophic website failure. Site Reliability Engineering (SRE) has emerged on the frontline as businesses strive to maximize uptime. This book is a step-by-step framework to follow when your website is down and the countdown is on to fix it.Nat Welch ...

Eight previous editions of fans ranging from novices to Autodesk insiders can't be wrong. This bestselling, comprehensive guide is your best, one-stop, go-to guide for everything you'll need to master AutoCAD. Whether you're an AutoCAD veteran exploring what's new or a novice seeking to start with the basics and progress to advanced progr...

Learn the guidelines of integrating Java with native Mac OS X applications with this Devloper Reference book.Java is used to create nearly every type of application that exists and is one of the most required skills of employers seeking computer programmers. Java code and its libraries can be integrated with Mac OS X features, and this bo...

More and more Agile projects are seeking architectural roots as they struggle with complexity and scale - and they're seeking lightweight ways to do it.Still seeking? In this book the authors help you to find your own path; Taking cues from Lean development, they can help steer your project toward practices with longstanding track records...

Following the success of the first edition, this thoroughly updated second edition of Image Processing: The Fundamentals will ensure that it remains the ideal text for anyone seeking an introduction to the essential concepts of image processing. New material includes image processing and colour, sine and cosine transforms, Independent Com...

Linux deployment continues to increase, and so does the demand for qualified and certified Linux system administrators. If you're seeking a job-based certification from the Linux Professional Institute (LPI), this updated guide will help you prepare for the technically challenging LPIC Level 1 Exams 101 and 102.The third edition of this b...