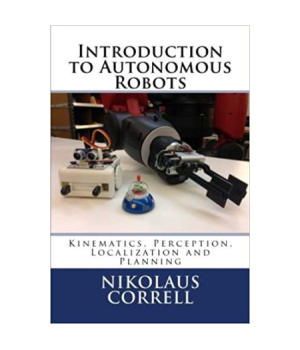 This book provides an algorithmic perspective to autonomous robotics to students with a sophomore-level of linear algebra and probability theory. Robotics is an emerging field at the intersection of mechanical engineering, electrical engineering, and computer science. With computers becoming more powerful, making robots smart is getting more and more into the focus of attention and robotics research most challenging frontier. While there is a large number of textbooks on the mechanics and dynamics of robots available to sophomore-level undergraduates, books that provide a broad algorithmic perspective are mostly limited to the graduate level. This book has therefore been developed not to create "yet another textbook, but better than the others", but to allow us to teach robotics to the 3rd and 4th year undergraduates at the Department of Computer Science at the University of Colorado.

Although falling under the umbrella of "Artificial Intelligence", standard AI techniques are not sufficient to tackle problems that involve uncertainty, such as a robot's interaction in the real world. This book uses simple trigonometry to develop the kinematic equations of manipulators and mobile robots, then introduces path planning, sensing, and lastly uncertainty. The robot localization problem is introduced by formally defining error propagation, which leads to Markov localization, Particle filtering and finally the Extended Kalman Filter, and Simultaneous Localization and Mapping. Instead of focusing on state-of-the-art solutions to a particular sub-problem, emphasis of the book is on a progressive step-by-step development concepts through recurrent examples that capture the essence of a problem. The described solutions might not necessarily be the best, however they are easy to comprehend and widely used in the community. For example, odometry and line-fitting are used to explain forward kinematics and least-squares solutions, respectively, and later serve as motivating examples for error propagation and the Kalman filter in a localization context.

Notably, the book is explicitly robot-agnostic, reflecting the timeliness of fundamental concepts. Rather, a series of possible project-based curricula are described in an Appendix and available online, ranging from a maze-solving competition that can be realized with most camera-equipped differential-wheel robots to manipulation experiments with a robotic arm, all of which can be entirely conducted in simulation to teach most of the core concepts.

Whether you're a novice or intermediate user, you will benefit from extensive coverage of core MySQL features like user administration, basic and advanced querying, and security. You will also be introduced to several standard and third-party tools, like MySQL Administrator, Query Browser, and the popular PHPMyAdmin tool.MySQL 5 is s...

Zed Shaw has perfected the world's best system for learning Python. Follow it and you will succeed-just like the hundreds of thousands of beginners Zed has taught to date! You bring the discipline, commitment, and persistence; the author supplies everything else.In Learn Python the Hard Way, 3rd Edition, you'll learn Python by w...

No programming experience required! Incremental examples show you the steps and missteps that happen while developing programs, so you know what to expect when you tackle a problem on your own. Inspired by "How to Design Programs" (HtDP), discover a five-step recipe for designing functions, which helps you learn the concepts - a...

In the newly revised Fifth Edition of Introduction to UAV Systems, an expert team of aviators, engineers, and researchers delivers the fundamentals of UAV systems for both professionals and students in UAV courses. Suitable for students in Aerospace Engineering programs, as well as Flight and Aeronautics programs, this new edition now inc...

A hands-on book that explains concepts "by doing," Introduction to Game Design, Prototyping, and Development, 3rd Edition, takes readers through the process of making both paper and digital game prototypes. Rather than focusing on a single tutorial, as most Unity books have done, this book explores several small prototypes, rein...

Robot Building for Beginners, 3rd Edition provides basic, practical knowledge on getting started in amateur robotics. There is a mix of content: from serious reference tables and descriptions to personal stories and humorous bits.The robot described and built in this book is battery powered and about the size of a lunch box. It is autonom...

An Introduction to the Analysis of Algorithms, 2nd Edition

Despite growing interest, basic information on methods and models for mathematically analyzing algorithms has rarely been directly accessible to practitioners, researchers, or students. An Introduction to the Analysis of Algorithms, 2ond Edition, organizes and presents that knowledge, fully introducing primary techniques and results in th...