A No-Nonsense Guide to Rails Development 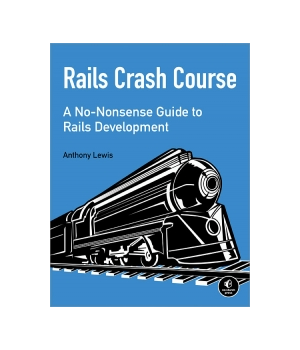 Rails is a robust, flexible development platform that lets you build complex websites quickly. Major websites like GitHub, Hulu, and Twitter have run Rails under the hood, and if you know just enough HTML and CSS to be dangerous, Rails Crash Course will teach you to harness Rails for your own projects and create web applications that are fast, stable, and secure.

In Part I, you'll learn Ruby and Rails fundamentals and then dive straight into models, controllers, views, and deployment.

In Part II, you'll take your skills to the next level as you build a social networking app with more advanced Ruby tools, such as modules and metaprogramming, and advanced data modeling techniques within Rails's Active Record.

Each chapter is packed with hands-on examples and exercises to reinforce what you've learned. Whether you're completely new to Ruby or you've been mucking around for a bit, Rails Crash Course will take you from the basics to shipping your first Rails application, fast.

Python Crash Course is a fast-paced, thorough introduction to Python that will have you writing programs, solving problems, and making things that work in no time.In the first half of the book, you'll learn about basic programming concepts, such as lists, dictionaries, classes, and loops, and practice writing clean and readable code with ...

C++ is one of the most widely used languages for real-world software. In the hands of a knowledgeable programmer, C++ can produce small, efficient, and readable code that any programmer would be proud of.Designed for intermediate to advanced programmers, C++ Crash Course cuts through the weeds to get you straight to the core of C++17, the...

This is the 2nd edition of the best selling Python book in the world. Python Crash Course, 2nd Edition is a straightforward introduction to the core of Python programming. Author Eric Matthes dispenses with the sort of tedious, unnecessary information that can get in the way of learning how to program, choosing instead to provide a founda...

The Basics of User Experience Design

If you're looking to gain an introduction into the world of user experience (UX) design - or maybe even freshen up your knowledge of the field - then this UX design book is the ideal place to start.You'll cover a wide range of topics over nine highly readable chapters, with each one acting as a mini crash course. By the end, you'll have b...

If you used iPhoto when it first came out, you'll remember the way it slowed to a crawl once you loaded it with about 2,000 photos. Compare that to this year's model: iPhoto 6 can handle as many as 250,000 images and still have the power to run a host of suped-up features. Its new software engine lets you make changes with a drag & dr...

Professional Hadoop is the complete reference and resource for experienced developers looking to employ Apache Hadoop in real-world settings. Written by an expert team of certified Hadoop developers, committers, and Summit speakers, this book details every key aspect of Hadoop technology to enable optimal processing of large data sets. De...