Designing APIs with Swagger and OpenAPI 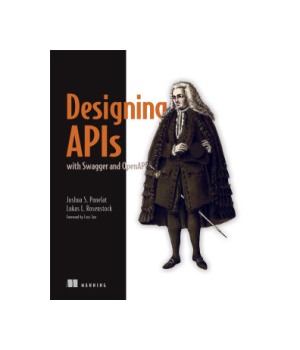 Designing APIs with Swagger and OpenAPI is a comprehensive guide to designing and describing your first RESTful API using the most widely adopted standards. Following expert instruction from Swagger core contributor Josh Ponelat and API consultant Lukas Rosenstock, you'll spend each chapter progressively expanding the kind of APIs you'll want to build in the real world. You'll utilize OpenAPI and Swagger to help automate your workflow, and free up your time to work on more exciting features. Learn the syntax and structure of OpenAPI definitions, create and iterate on an API design with common tools, and release your API to the public.

Create web APIs that customers and developers will love! Using Swagger, a collection of tools for defining and documenting REST APIs, you will build safe, controlled access to your software. And because Swagger implements the vendor-neutral OpenAPI specification, you'll be building to the same standards adopted by Google, Microsoft, and Amazon.

Designing APIs with Swagger and OpenAPI introduces a design-first approach. Written for developers new to API design, it follows the lifecycle of an API project from concept to production. You'll explore the dos and don'ts of APIs through progressively complete examples. You'll get hands-on experience designing APIs for specific business needs, using open source tools to generate documentation, and building developer-friendly components like mocks and client SDKs.

Build a Weather Station with Elixir and Nerves

The Elixir programming language has become a go-to tool for creating reliable, fault-tolerant, and robust server-side applications. Thanks to Nerves, those same exact benefits can be realized in embedded applications. This book will teach you how to structure, build, and deploy production grade Nerves applications to network-enabled devic...

Beginning iOS Apps with Facebook and Twitter APIs shows you how to add the power of social networking to your mobile apps on iPhone, iPad, and iPod touch. With this book as your guide, you can write apps that connect to Facebook and Twitter quickly, securely, and discreetly. Instead of starting from scratch, you will build on the vast res...

Practical API Architecture and Development with Azure and AWS

Learn the business and technical importance of API design and architecture using the available cloud services from Azure and AWS.This book starts off with an introduction to APIs and the concept of API Economy from a business and organizational perspective. You'll decide on a sustainable API strategy and API architecture based on dif...

With this concise book, you'll learn the art of building hypermedia APIs that don't simply run on the Web, but that actually exist in the Web. You'll start with the general principles and technologies behind this architectural approach, and then dive hands-on into three fully-functional API examples.Too many APIs rely on co...

Build HTML5-based hybrid applications for Android with a mix of native Java and JavaScript components, without using third-party libraries and wrappers such as PhoneGap or Titanium. This concise, hands-on book takes you through the entire process, from setting up your development environment to deploying your product to an app store.Learn...

Create high-performance, visually stunning 3D applications for the Web, using HTML5 and related technologies such as CSS3 and WebGL - the emerging web graphics standard. With this book, you'll learn how to use the tools, frameworks, and libraries for building 3D models and animations, mind-blowing visual effects, and advanced user in...

Py2neo is a simple and pragmatic Python library that provides access to the popular graph database Neo4j via its RESTful web service interface. This brings with it a heavily refactored core, a cleaner API, better performance, and some new idioms.You will begin with licensing and installing Neo4j, learning the fundamentals of Cypher as a g...