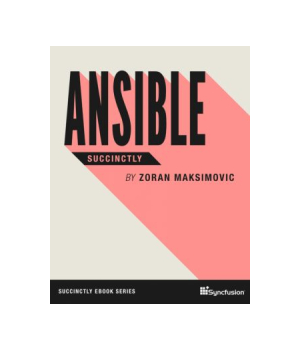 Ansible is an open-source software, automation engine, and automation language mainly used in software configuration management, infrastructure provisioning, configuration management, application deployment, and orchestration. The core Ansible is written in Python and can be used on Unix-like machines or Microsoft Windows. In Ansible Succinctly, Zoran Maksimovic will give you a foundation in the basics of Ansible, from installation to using playbooks to sharing roles in Ansible Galaxy.

Ansible combines configuration management, orchestration, and parallel command execution into a single tool. Its batteries-included approach and built-in module library makes it easy to integrate it with cloud platforms, databases, and notification services without requiring additional plugins. Playbooks in Ansible define the policies you...

Ansible is an open source software platform for configuring and managing computers. It provides a clear and concise way to manage the configuration of your Linux infrastructure. This book is a step-by-step guide that provides you with the knowledge you require to effectively manage your systems in a simple, quick, and maintainable way, wi...

Get ready to leverage the power of Ansible's wide applicability to automate and manage IT infrastructure with Ansible for Real-Life Automation. This book will guide you in setting up and managing the free and open source automation tool and remote-managed nodes in the production and dev/staging environments.Starting with its installa...

Ionic 4 takes the original Ionic toolkit from a mobile-centric framework based on Angular to a powerful, web-based UI design system and app-development toolset that is JavaScript-framework agnostic. The increased performance of Ionic 4 components makes the framework ideal for developing progressive web apps (PWAs), which are in high deman...

C# Features Succinctly is a concise guide to the significant features packaged in C# 7, 8, and 9. To help readers understand the evolution of the language, author Dirk Strauss first covers the important additions that arrived in version 7, such as tuples, pattern matching, and out variables. Next, he covers more than a dozen features in v...

What's the right way to move existing applications to the cloud to better use its power while enabling new features? In App Modernization on Azure Succinctly, Lorenzo Barbieri will help you understand how to modernize existing apps without completely rewriting them. This ebook will guide you through moving your app to the cloud, refa...

Containers have revolutionized software development, allowing developers to bundle their applications with everything they need, from the operating system up, into a single package. Docker is one of the most popular platforms for containers, allowing them to be hosted on-premises or on the cloud, and to run on Linux, Windows, and Mac mach...