How to develop, build, test, package, and release Eclipse plug-ins with features for Eclipse 3.x and Eclipse 4.x 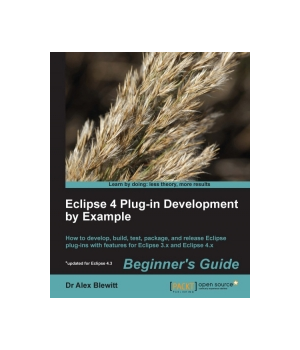 As a highly extensible platform, Eclipse is used by everyone from independent software developers to NASA. Key to this is Eclipse's plug-in ecosystem, which allows applications to be developed in a modular architecture and extended through its use of plug-ins and features.

Eclipse 4 Plug-in Development by Example Beginner's Guide takes the reader through the full journey of plug-in development, starting with an introduction to Eclipse plug-ins, continued through packaging and culminating in automated testing and deployment. The example code provides simple snippets which can be developed and extended to get you going quickly.

Are you a developer that wants to create truly cross-platform user experiences with a minimal footprint, free of store restrictions and features customers want? Then you need to get to grips with Progressive Web Applications (PWAs), a perfect amalgamation of web and mobile applications with a blazing-fast response time.Progressive Web App...

HTML5's new features have made it a real application development platform with widespread adoption throughout the industry for this purpose. Being able to create one application that can run on virtually any device from phone to desktop has made it the first choice among developers. Although JavaScript has been around for a while now, it ...

The OUYA console and development kit gives you the power to publish video games for the players, creating a console marketplace of the gamers, for the gamers, and by the gamers. Using the OUYA developer kit and the Unity3D game engine, even beginners with a captivating game idea can bring it to life with a hint of imagination.OUYA Game De...

Filled with practical, step-by-step instructions and clear explanations for the most important and useful tasks. A concise guide that delivers immediate results with practical recipes on learning practical hints and avoiding pitfalls in Eclipse 4 development. You will find this book useful if you are looking to create cross-platform rich ...

Learn the structure of a 3D world and how to implement a variety of 3D techniques including terrain generation and 3D model rendering. Build three different types of 3D games step-by-step, including a first-person maze game, a battlefield tank game, and a 3D sidescrolling action game on the surface of Mars. Learn to utilize High Level Sha...