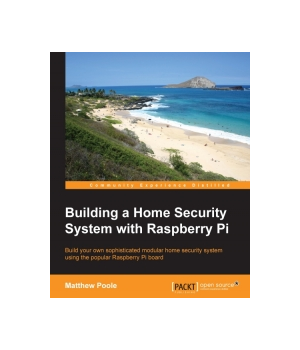 Building a Home Security System with Raspberry Pi starts off by showing you the Raspberry Pi and how to set up the Linux-based operating system. It then guides you through connecting switch sensors and LEDs to the native GPIO connector safely, and how to access them using simple Bash scripts. As you dive further in, you'll learn how to build an input/output expansion board using the I2C interface and power supply, allowing the connection of the large number of sensors needed for a typical home security setup.

One of the best kept secrets of the security industry is just how simple the monitoring hardware actually is - BeagleBone has all the computing power you need to build yourself an extremely sophisticated access control, alarm panel, and home automation and network intrusion-detection system. Security companies make a fortune each year by ...

Learning electronics can be tremendous fun - your first flashing LED circuit is a reason to celebrate! But where do you go from there, and how can you move into more challenging projects without spending a lot of money on proprietary kits? One excellent answer is Raspberry Pi.Raspberry Pi is everywhere, it's inexpensive, and it's a wonder...

Learn how to use a Raspberry Pi in conjunction with an Arduino to build a basic robot with advanced capabilities. Getting started in robotics does not have to be difficult. This book is an insightful and rewarding introduction to robotics and a catalyst for further directed study. You'll be led step by step through the process of building...

Learn Raspberry Pi Programming with Python will show you how to program your nifty new $35 computer to make a web spider, a weather station, a media server, and more. You'll learn how to program in Python on your Raspberry Pi with hands-on examples and fun projects.Even if you're completely new to programming in general, you'll figure out...