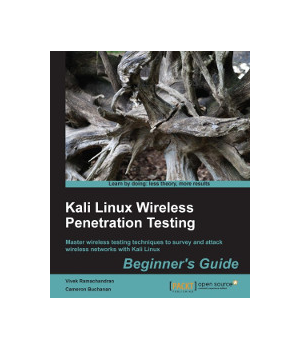 As wireless networks become ubiquitous in our lives, wireless penetration testing has become a key skill in the repertoire of the professional penetration tester. The Kali Linux security distribution comes with a myriad of tools used for networking attacks and detecting security loopholes.

Kali Linux Wireless Penetration Testing Beginner's Guide presents wireless pentesting from the ground up, introducing all elements of penetration testing with each new technology. Learn various wireless testing methodologies by example, from the basics of wireless routing and encryption through to detailed coverage of hacking methods and attacks such as the Hirte and Caffe Latte.

Kali Linux is a Debian-based Linux distribution designed for digital forensics and penetration testing. It gives access to a large collection of security-related tools for professional security testing - some of the major ones being Nmap, Aircrack-ng, Wireshark, and Metasploit.This book will take you on a journey where you will learn to m...

Penetration testing is a tool for testing computer systems, networks, or web applications to find vulnerabilities that an attacker could exploit. By performing a penetration test, you can proactively identify which vulnerabilities are most critical. This allows your organization to more intelligently prioritize remediation and apply neces...

Kali Linux is built for professional penetration testing and security auditing. It is the next-generation of BackTrack, the most popular open-source penetration toolkit in the world. Readers will learn how to think like real attackers, exploit systems, and expose vulnerabilities.Even though web applications are developed in a very secure ...

Microsoft Windows is one of the two most common OSes, and managing its security has spawned the discipline of IT security. Kali Linux is the premier platform for testing and maintaining Windows security. Kali is built on the Debian distribution of Linux and shares the legendary stability of that OS. This lets you focus on using the networ...

Kali Linux is a comprehensive penetration testing platform with advanced tools to identify, detect, and exploit the vulnerabilities uncovered in the target network environment. With Kali Linux, you can apply the appropriate testing methodology with defined business objectives and a scheduled test plan, resulting in successful penetration ...

Kali Linux 2.0 is the new generation of the industry-leading BackTrack Linux penetration testing and security auditing Linux distribution. It contains several hundred tools aimed at various information security tasks such as penetration testing, forensics, and reverse engineering.At the beginning of the book, you will be introduced to the...