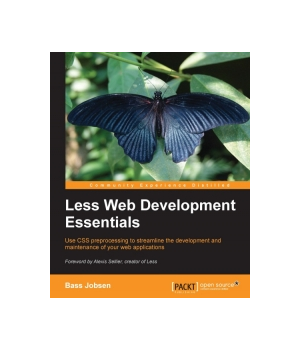 Less is a CSS preprocessor that essentially improves the functionality of simple CSS with the addition of several features. The book begins by teaching you how Less facilitates the process of web development. You will quickly then move on to actually creating your first layout using Less and compiling your very first Less code.

Next, you will learn about variables and mixins and how they will help in building robust CSS code. In addition, you'll learn how to keep your code clean and test it by using style guides. We will then move on to the concept of Bootstrapping and the strength of using Less with Twitter Bootstrap. Going one step further, you will be able to customize Twitter's Bootstrap 3 using Less.

Less is a preprocessor for CSS that uses less.js for real-time compilation, unlike other preprocessors. Building responsive websites with advanced features such as gradients and animations makes your CSS code complex. Less helps you to write clean, reusable, and maintainable CSS.Starting off with the fundamental concepts of Less and CSS, ...

jQuery Mobile is a unified, HTML5-based user interface system for all popular mobile device platforms. It is the most practical HTML / JavaScript framework available today. In this tutorial, you will learn how to use jQuery Mobile with your HTML pages, and create mobile friendly websites in no time.jQuery Mobile Web Development Essentials...

Web development is still one of today's most popular, active, and important programming and development activities. From a single web page to an e-commerce-enabled web site to a fully-fledged web application, the Java programming language and its frameworks allow you great flexibility and productivity for your web application development....

HTML5 Boilerplate Web Development - will enable you to build new projects effectively with minimal effort. HTML5 Boilerplate allows you to deploy quality websites successfully and quickly while also ensuring robust cross-browser performance. It takes you through the step-by-step process of creating a website and teaches you to take full a...