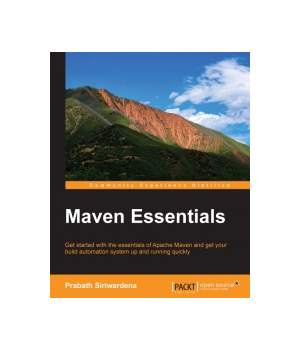 Maven is the #1 build tool used by developers and it has been around for more than a decade. Maven stands out among other build tools due to its extremely extensible architecture, which is built on of the concept of convention over configuration. It's widely used by many open source Java projects under Apache Software Foundation, Sourceforge, Google Code, and more.

Maven Essentials is a fast-paced guide to show you the key concepts in Maven and build automation. We get started by introducing you to Maven and exploring its core concepts and architecture. Next, you will learn about and write a Project Object Model (POM) while creating your own Maven project. You will also find out how to create custom archetypes and plugins to establish the most common goals in build automation. After this, you'll get to know how to design the build to prevent any maintenance nightmares, with proper dependency management. We then explore Maven build lifecycles and Maven assemblies. Finally, you will discover how to apply the best practices when designing a build system to improve developer productivity.

With ADF, Oracle gives you the chance to use the powerful tool used by Oracle's own developers. Modern enterprise applications must be user-friendly, visually attractive, and fast performing. Oracle Fusion Applications are just that; but to get the desired output you need proven methods to use this powerful and flexible tool to achieve su...

Maven is the number one build tool used by developers for more than a decade. Maven stands out among other build tools due to its extremely extensible architecture, which is built on top of the concept &quot;convention over configuration&quot;. This has made Maven the de-facto tool used to manage and build Java projects.This book ...

Android is an open source operating system used for smartphones and tablet computers. The Android market is one of the biggest and fastest growing platforms for application developers, with over a million apps uploaded every day.Right from the beginning, this book will cover how to set up your Maven development environment and integrate i...

This fully reworked edition of a proven title is the most useful real-world guide to building robust, commercial-grade Android™ apps. The content is revised and updated for the latest Android 4.3 SDK and the newest development best practices. Introduction to Android™ Application Development: Android Essentials, Fourth Edition,covers a...

Concise but thorough, this second edition of C# Essentials introduces the Microsoft C# programming language, including the Microsoft .NET Common Language Runtime (CLR) and .NET Framework Class Libraries (FCL) that support it. This book?s compact format and terse presentation of key concepts serve as a roadmap to the online documentation i...

In a typical organization, there's always plenty that to do such as: pay vendors, invoice customers, answer customer inquiries, and fix bugs in hardware or software. You need to know who wants what and keep track of what is left to do.This is where a ticketing system comes in. A ticketing system allows you to check the status of various t...

Do you have an idea for a Facebook application? With FBML Essentials, you'll learn how to build it quickly using the Facebook Markup Language (FBML) and other easy-to-use tools in the site's framework. This book not only gets you started with this toolkit, you also get a complete reference on every FBML tag Facebook has ever written, with...