Become fluent in both frontend and backend web development with Docker, Angular and Laravel 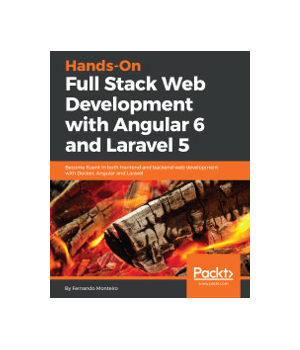 Angular, considered as one of the most popular and powerful frontend frameworks, has undergone a major overhaul to embrace emerging web technologies so that developers can build cutting-edge web applications.

This book gives you practical knowledge of building modern full-stack web apps from scratch using Angular with a Laravel Restful back end.

The book begins with a thorough introduction to Laravel and Angular and its core concepts like custom errors messages, components, routers, and Angular-cli, with each concept being explained first, and then put into practice in the case-study project.

With the basics covered, you will learn how sophisticated UI features can be added using NgBootstrao and a component-based architecture. You will learn to extend and customize variables from Bootstrap CSS framework.

By the end of this book, you'll gain a solid understanding of Angular 6 and how it interacts with a Laravel 5.x backend.

Making Swift an open-source language enabled it to share code between a native app and a server. Building a scalable and secure server backend opens up new possibilities, such as building an entire application written in one language - Swift.This book gives you a detailed walk-through of tasks such as developing a native shopping list app...

This book is about building professional web applications and web services using Swift 4.0 and leveraging two popular Swift web frameworks: Vapor 3.0 and Kitura 2.5. In the first part of this book, we'll focus on the creation of basic web applications from Vapor and Kitura boilerplate projects. As the web apps start out simple, more usefu...

Building Applications with Spring 5 and Vue.js 2

Building Applications with Spring 5 and Vue.js 2, with its practical approach, helps you become a full-stack web developer. As well as knowing how to write frontend and backend code, a developer has to tackle all problems encountered in the application development life cycle - starting from the simple idea of an application, to the UI and...

As a Rails developer, you care about user experience and performance, but you also want simple and maintainable code. Achieve all that by embracing the full stack of web development, from styling with Bootstrap, building an interactive user interface with AngularJS, to storing data quickly and reliably in PostgreSQL. Take a holistic view ...