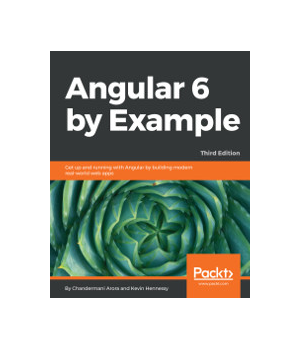 Angular helps you build faster, efficient, and flexible cross-platform applications. Creating complex and rich web applications, with a lighter resource footprint, has never been easier or faster. Angular is now at release 6, with significant changes compared to previous versions.

In this third edition of Angular by Example, you'll build three apps with varying degrees of complexity. The book starts with a simple "Guess the Number" game, which serves as a platform to launch you into the world of Angular. Next, you will learn to develop a popular "7-Minute Workout" app, covering the building blocks of Angular. The final app, "Personal Trainer" morphs the existing "7-Minute Workout" into a full-fledged personal workout builder and runner, covering advanced directive building, which is the most fundamental and powerful feature of Angular.In addition to this, you will learn about testability and the framework constructs Angular provides to effectively test your app. The book concludes by providing you with practical advice and useful tips that will come in handy as you build more apps with Angular.

Regression analysis is a conceptually simple method for investigating relationships among variables. Carrying out a successful application of regression analysis, however, requires a balance of theoretical results, empirical rules, and subjective judgment. Regression Analysis by Example, Fifth Edition has been expanded and thoroughly upda...

Artificial intelligence (AI) has the potential to replicate humans in every field. Artificial Intelligence By Example, Second Edition serves as a starting point for you to understand how AI is built, with the help of intriguing and exciting examples.This book will make you an adaptive thinker and help you apply concepts to real-world scen...

If you want to learn the entire process of developing professional web applications with Python and Django, then this book is for you. In the process of building four professional Django projects, you will learn about Django 3 features, how to solve common web development problems, how to implement best practices, and how to successfully ...