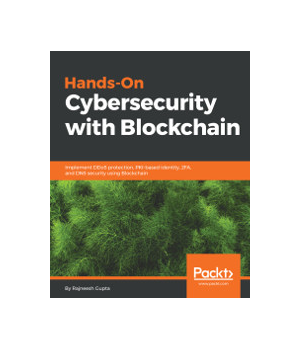 Blockchain technology is being welcomed as one of the most revolutionary and impactful innovations of today. Blockchain technology was first identified in the world's most popular digital currency, Bitcoin, but has now changed the outlook of several organizations and empowered them to use it even for storage and transfer of value.

This book will start by introducing you to the common cyberthreat landscape and common attacks such as malware, phishing, insider threats, and DDoS. The next set of chapters will help you to understand the workings of Blockchain technology, Ethereum and Hyperledger architecture and how they fit into the cybersecurity ecosystem. These chapters will also help you to write your first distributed application on Ethereum Blockchain and the Hyperledger Fabric framework. Later, you will learn about the security triad and its adaptation with Blockchain. The last set of chapters will take you through the core concepts of cybersecurity, such as DDoS protection, PKI-based identity, 2FA, and DNS security. You will learn how Blockchain plays a crucial role in transforming cybersecurity solutions.

Toward the end of the book, you will also encounter some real-world deployment examples of Blockchain in security cases, and also understand the short-term challenges and future of cybersecurity with Blockchain.

There has been a rapid increase in the use of JavaScript in hardware and embedded device programming. JavaScript has an effective set of frameworks and libraries that support the robotics ecosystem.Hands-On Robotics with JavaScript starts with setting up an environment to program robots in JavaScript. Then, you will dive into building bas...

Get hands-on experience with each Gang of Four design pattern using C#. For each of the patterns, you'll see at least one real-world scenario, a coding example, and a complete implementation including output.In the first part of Design Patterns in C#, you will cover the 23 Gang of Four (GoF) design patterns, before moving onto some altern...

Microservices enable us to develop software in small pieces that work together but can be developed separately; this is one reason why enterprises have started embracing them. For the past few years, Node.js has emerged as a strong candidate for developing microservices because of its ability to increase your productivity and the performa...

Hands-On DevOps with Vagrant teaches you how to use Vagrant as a powerful DevOps tool and gives an overview of how it fits into the DevOps landscape. You will learn how to install VirtualBox and Vagrant in Windows, macOS, and Linux. You will then move on to understanding Vagrant commands, discovering its boxes and Vagrant Cloud.After gett...

Cryptography is essential for protecting sensitive information, but it is often performed inadequately or incorrectly.Hands-On Cryptography with Python starts by showing you how to encrypt and evaluate your data. The book will then walk you through various data encryption methods,such as obfuscation, hashing, and strong encryption, and wi...

BPEL, Business Process Execution Language is the definitive standard in writing and defining actions within business processes. Oracle BPEL Process Manager R1 is Oracle's latest offering, providing you with a complete end-to-end platform for the creation, implementation, and management of your BPEL business processes that are so important...