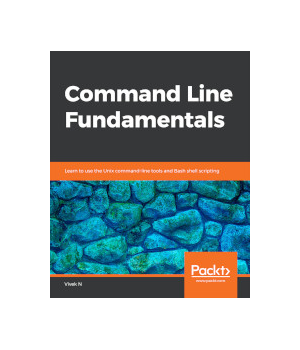 The most basic interface to a computer - the command line - remains the most flexible and powerful way of processing data and performing and automating various day-to-day tasks.

Command Line Fundamentals begins by exploring the basics, and then focuses on the most common tool, the Bash shell (which is standard on all Linux and iOS systems). As you make your way through the book, you'll explore the traditional Unix command-line programs as implemented by the GNU project. You'll also learn to use redirection and pipelines to assemble these programs to solve complex problems.

By the end of this book, you'll have explored the basics of shell scripting, allowing you to easily and quickly automate tasks.

Linux Command Line and Shell Scripting Bible is your essential Linux guide. With detailed instruction and abundant examples, this book teaches you how to bypass the graphical interface and communicate directly with your computer, saving time and expanding capability. This third edition incorporates thirty pages of new functional examples ...

In this book, you'll discover everything you need to know to master shell scripting and make informed choices about the elements you employ.Grab your favorite editor and start writing your best Bash scripts step by step. Get to grips with the fundamentals of creating and running a script in normal mode, and in debug mode. Learn about vari...

There's a lot to be said for going back to basics. Not only does this Bible give you a quick refresher on the structure of open-source Linux software, it also shows you how to bypass the hefty graphical user interface on Linux systems and start interacting the fast and efficient way with command lines and automated scripts. You'll learn h...

The Linux command line allows you to type specific Linux commands directly to the system so that you can easily manipulate files and query system resources, thereby permitting you to automate commonly used functions and even schedule those programs to run automatically. This new edition is packed with new and revised content, reflecting t...

This is Linux for those of us who don't mind typing. All Linux users and administrators tend to like the flexibility and speed of Linux administration from the command line in byte-sized chunks, instead of fairly standard graphical user interfaces. Beginning the Linux Command Line is verified against all of the most important Linux distri...

Oracle Enterprise Manager 12c Command-Line Interface shows how to use Enterprise Manager's powerful scripting language to automate your database administration work and save time by scripting routine tasks, and then executing those scripts across collections of databases and instances in your environment. This book is chock full of ready-...

This concise book shows you how to create PHP Command Line Interface (CLI) scripts, including user interaction and scripts to automate and assist your workflow. Learn to quickly create useful and effective Command Line software and scripts using the world's most popular web scripting language, PHP. Enjoy the benefits of writing CLI script...

Data Science at the Command Line

This hands-on guide demonstrates how the flexibility of the command line can help you become a more efficient and productive data scientist. You'll learn how to combine small, yet powerful, command-line tools to quickly obtain, scrub, explore, and model your data.To get you started - whether you're on Windows, OS X, or Linux - author Jero...