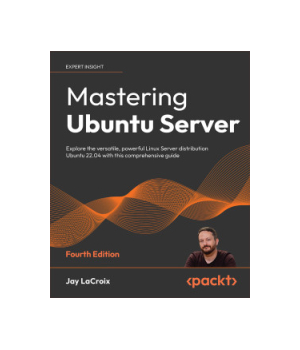 Ubuntu Server is taking the server world by storm - and for a good reason! The server-focused spin of Ubuntu is a stable, flexible, and powerful enterprise-class distribution of Linux with a focus on running servers both small and large.

Mastering Ubuntu Server is a book that will teach you everything you need to know in order to manage real Ubuntu-based servers in actual production deployments. This book will take you from initial installation to deploying production-ready solutions to empower your small office network, or even a full data center. You'll see examples of running an Ubuntu Server in the cloud, be walked through set up popular applications (such as Nextcloud), host your own websites, and deploy network resources such as DHCP, DNS, and others. You'll also see how to containerize applications via LXD to maximize efficiency and learn how to build Kubernetes clusters. This new fourth edition updates the popular book to cover Ubuntu 22.04 LTS, which takes advantage of the latest in Linux-based technologies.

By the end of this Ubuntu book, you will have gained all the knowledge you need in order to work on real-life Ubuntu Server deployments and become an expert Ubuntu Server administrator who is well versed in its feature set.

Ubuntu is a Debian-based Linux operating system built on top of the Debian architecture. It is used to make operating systems for multiple platforms, including phones, desktops, TVs and mobiles. It has made some serious progress in the realms of efficiency and user friendliness.With evolving technology trends, demands on software have cha...

Ubuntu is one of the most secure operating systems and defines the highest level of security as compared other operating system. Ubuntu server is a popular Linux distribution and the first choice when deploying a Linux server. It can be used with a $35 Raspberry Pi to top-notch, thousand-dollar-per-month cloud hardware. Built with lists t...

TypeScript is both a language and a set of tools to generate JavaScript. It was designed by Anders Hejlsberg at Microsoft to help developers write enterprise-scale JavaScript.Using a fast-paced, but easy-to-follow set of code samples, this fourth edition will get you up and running with Typescript quickly, introduce core concepts, and the...

Pro Ubuntu Server Administration teaches you advanced Ubuntu system building. After reading this book, you will be able to manage anything from simple file servers to multiple virtual servers to high - availability clusters. This is the capstone volume of the Apress Ubuntu trilogy that includes Beginning Ubuntu Linux, Third Edition and Be...

SQL Server T-SQL Recipes is an example-based guide to the Transact-SQL language that is at the core of SQL Server. This edition has been lightly updated for SQL Server 2014 and provides ready-to-implement solutions to common programming and database administration tasks. Learn to create databases, create in-memory tables and stored proced...