A Graduate Course in Applied Cryptography

The indispensable tool used to protect information in computing systems 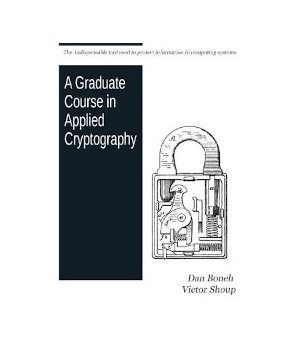 Cryptography is an indispensable tool used to protect information in computing systems. It is used everywhere and by billions of people worldwide on a daily basis. It is used to protect data at rest and data in motion. Cryptographic systems are an integral part of standard protocols, most notably the Transport Layer Security (TLS) protocol, making it relatively easy to incorporate strong encryption into a wide range of applications.

While extremely useful, cryptography is also highly brittle. The most secure cryptographic system can be rendered completely insecure by a single specification or programming error. No amount of unit testing will uncover a security vulnerability in a cryptosystem.

Instead, to argue that a cryptosystem is secure, we rely on mathematical modeling and proofs to show that a particular system satisfies the security properties attributed to it. We often need to introduce certain plausible assumptions to push our security arguments through.

The dev world has permanently embraced open platforms with flexible tooling, and ASP.NET Core has changed with it. This free, open source web framework delivers choice without compromise. You can enjoy the benefits of a mature, well-supported stack and the freedom to develop and deploy from and onto any cloud or on-prem platform.ASP.NET C...

Use this collection of best practices and tips for assessing the health of a solution. This book provides detailed techniques and instructions to quickly diagnose aspects of your Azure cloud solutions.The initial chapters of this book introduce you to the many facets of Microsoft Azure, explain why and how building for the cloud differs f...

Master the features of C++ that are frequently used to write financial software for options and derivatives, including the STL, templates, functional programming, and numerical libraries. This book also covers new features introduced in C++20 and other recent standard releases: modules, concepts, spaceship operators, and smart pointers. Y...