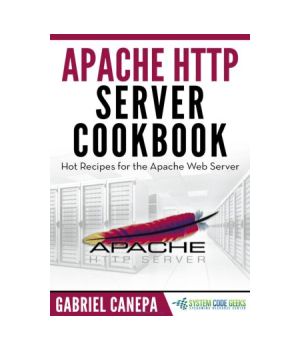 The Apache HTTP Server, colloquially called Apache, is the world's most used web server software. Originally based on the NCSA HTTPd server, development of Apache began in early 1995 after work on the NCSA code stalled. Apache played a key role in the initial growth of the World Wide Web, quickly overtaking NCSA HTTPd as the dominant HTTP server, and has remained most popular since April 1996. In 2009, it became the first web server software to serve more than 100 million websites.

Apache is developed and maintained by an open community of developers under the auspices of the Apache Software Foundation. Most commonly used on a Unix-like system (usually Linux), the software is available for a wide variety of operating systems besides Unix, including eComStation, Microsoft Windows, NetWare, OpenVMS, OS/2, and TPF. Released under the Apache License, Apache is free and open-source software.

In this open book, we provide a compilation of Apache HTTP Server tutorials that will help you get started with this web server. We cover a wide range of topics, from installing the server and performing a basic configuration, to configuring Virtual Hosts and SSL support. With our straightforward tutorials, you will be able to get your own projects up and running in minimum time.

Nginx is a lightweight HTTP server designed for high-traffic websites, with network scalability as the primary objective. With the advent of high speed Internet access, short loading times and fast transfer rates have become a necessity. This free, open source solution will either come as a full replacement of other software such as Apach...

CentOS is a community-based enterprise class operating system and this book will provide a series of practical solutions that will not only show you how to install and maintain CentOS as a server, but to explore this well-known Linux distribution with the intention of tackling many common issues by providing some tricks of the trade in or...

Apache Camel is a de-facto standard for developing integrations in Java, and is based on well-understood Enterprise Integration Patterns. It is used within many commercial and open source integration products. Camel makes common integration tasks easy while still providing the developer with the means to customize the framework when the s...

There's plenty of documentation on installing and configuring the Apache web server, but where do you find help for the day-to-day stuff, like adding common modules or fine-tuning your activity logging? That's easy. The new edition of the Apache Cookbook offers you updated solutions to the problems you're likely to encounte...

Running your own dedicated server has become simpler and less expensive. These days, administering a development server or hosting sites and web applications has become part of the job for many developers. Webmin is an easy-to-use web-based tool which makes getting started with new administrative tasks and performing common jobs more simp...

Learn how to make Apache Solr search faster, more complete, and comprehensively scalable. Solve performance, setup, configuration, analysis, and query problems in no time. Get to grips with, and master, the new exciting features of Apache Solr 4....

Ubuntu is one of the most secure operating systems and defines the highest level of security as compared other operating system. Ubuntu server is a popular Linux distribution and the first choice when deploying a Linux server. It can be used with a $35 Raspberry Pi to top-notch, thousand-dollar-per-month cloud hardware. Built with lists t...

Adding a cache layer to the popular LAMP stack is becoming the common solution to significantly reduce the load on back-end databases, and also allows for better web application performance. This new caching component is represented by another &quot;m&quot; in LAMMP, which stands for memcached - a high-performance, distributed mem...