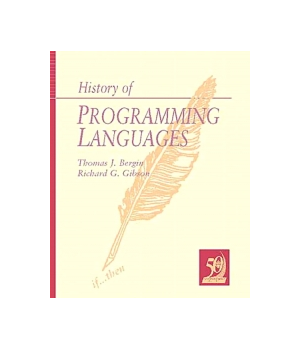 This specially prepared work comprises a living archive of important programming languages, described by the people most instrumental in their creation and development. Drawn from the ACM/SIGPLAN Second History of Programming Languages Conference, this volume, like the earlier book from the first such conference (HOPL), conveys the motivations of the language designers, and the reasons why they rejected existing languages and created new ones. The book relates the processes by which different languages evolved, in the words of the individuals active in the languages' development. Most important, participants share insights about influences and decisions, both on choices made, and on the many roads not taken. In the book's conclusion, distinguished historians of computing share views about preserving programming language history.

Masterminds of Programming features exclusive interviews with the creators of several historic and highly influential programming languages. In this unique collection, you'll learn about the processes that led to specific design decisions, including the goals they had in mind, the trade-offs they had to make, and how their experiences hav...

In this open book, our goal is to study the fundamental concepts in programming languages, as opposed to learning a range of specific languages. Languages are easy to learn, it is the concepts behind them that are difficult. The basic features we study in turn include higher-order functions, data structures in the form of records and vari...

Learn about bot programming, using all the latest and greatest programming languages, including Python, Go, and Clojure, so you can feel at ease writing your Telegram bot in a way that suits you.This book shows how you can use bots for just about everything: they connect, they respond, they enhance your job search chances, they do technic...

Python is a cross-platform language used by organizations such as Google and NASA. It lets you work quickly and efficiently, allowing you to concentrate on your work rather than the language. Based on his personal experiences when learning to program, Learn Programming in Python with Cody Jackson provides a hands-on introduction to comput...

by Bruce A. Tate

You should learn a programming language every year, as recommended by The Pragmatic Programmer. But if one per year is good, how about Seven Languages in Seven Weeks? In this book you'll get a hands-on tour of Clojure, Haskell, Io, Prolog, Scala, Erlang, and Ruby. Whether or not your favorite language is on that list, you'll broaden your ...

The Transactions on Pattern Languages of Programming subline aims to publish papers on patterns and pattern languages as applied to software design, development, and use, throughout all phases of the software life cycle, from requirements and design to implementation, maintenance and evolution. The primary focus of this LNCS Transactions ...

This cookbook provides more than 100 recipes to help you crunch data and manipulate text with regular expressions. With recipes for popular programming languages such as C#, Java, JavaScript, Perl, PHP, Python, Ruby, and VB.NET, Regular Expressions Cookbook will help you learn powerful new tricks, avoid language-specific gotchas, and save...