Talking Directly to the Kernel and C Library 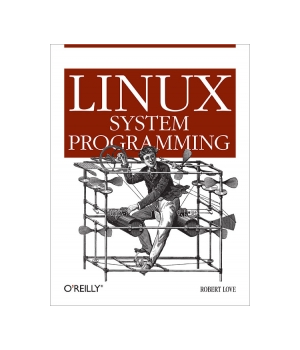 This book is about writing software that makes the most effective use of the system you're running on - code that interfaces directly with the kernel and core system libraries, including the shell, text editor, compiler, debugger, core utilities, and system daemons. The majority of both Unix and Linux code is still written at the system level, and Linux System Programming focuses on everything above the kernel, where applications such as Apache, bash, cp, vim, Emacs, gcc, gdb, glibc, ls, mv, and X exist.

Written primarily for engineers looking to program (better) at the low level, this book is an ideal teaching tool for any programmer. Even with the trend toward high-level development, either through web software (such as PHP) or managed code (C#), someone still has to write the PHP interpreter and the C# virtual machine. Linux System Programming gives you an understanding of core internals that makes for better code, no matter where it appears in the stack. Debugging high-level code often requires you to understand the system calls and kernel behavior of your operating system, too.

The Linux OS and its embedded and server applications are critical components of today's software infrastructure in a decentralized, networked universe. The industry's demand for proficient Linux developers is only rising with time. Hands-On System Programming with Linux gives you a solid theoretical base and practical industry-...

Linux is the world's most popular open source operating system (OS). Linux System Programming Techniques will enable you to extend the Linux OS with your own system programs and communicate with other programs on the system.The book begins by exploring the Linux filesystem, its basic commands, built-in manual pages, the GNU compiler ...

Write software that draws directly on services offered by the Linux kernel and core system libraries. With this comprehensive book, Linux kernel contributor Robert Love provides you with a tutorial on Linux system programming, a reference manual on Linux system calls, and an insider's guide to writing smarter, faster code.Love clearl...

C++ is a general-purpose programming language with a bias toward system programming as it provides ready access to hardware-level resources, efficient compilation, and a versatile approach to higher-level abstractions.This book will help you understand the benefits of system programming with C++17. You will gain a firm understanding of va...

The Linux Programming Interface (TLPI) is the definitive guide to the Linux and UNIX programming interface - the interface employed by nearly every application that runs on a Linux or UNIX system.In this authoritative work, Linux programming expert Michael Kerrisk provides detailed descriptions of the system calls and library functions th...

If you're an experienced system administrator looking to acquire Linux skills, or a seasoned Linux user facing a new challenge, Linux System Administration offers practical knowledge for managing a complete range of Linux systems and servers. The book summarizes the steps you need to build everything from standalone SOHO hubs, web se...

From creating networks and servers to automating the entire working environment, Linux has been extremely popular with system administrators for the last couple of decades. However, security has always been a major concern. With limited resources available in the Linux security domain, this book will be an invaluable guide in helping you ...

Building Embedded Linux Systems offers an in-depth, hard-core guide to putting together embedded systems based on Linux. Updated for the latest version of the Linux kernel, this new edition gives you the basics of building embedded Linux systems, along with the configuration, setup, and use of more than 40 different open source and free s...