An easy-to-understand primer on Virtual Reality and Augmented Reality 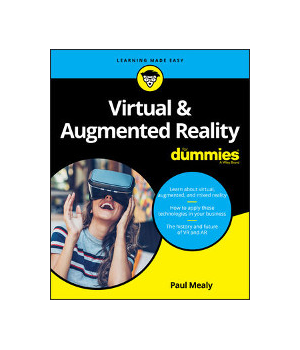 Virtual Reality (VR) and Augmented Reality (AR) are driving the next technological revolution. If you want to get in on the action, this book helps you understand what these technologies are, their history, how they're being used, and how they'll affect consumers both personally and professionally in the very near future.

With VR and AR poised to become mainstream within the next few years, an accessible book to bring users up to speed on the subject is sorely needed - and that's where this handy reference comes in! Rather than focusing on a specific piece of hardware (HTC Vive, Oculus Rift, iOS ARKit) or software (Unity, Unreal Engine), Virtual & Augmented Reality For Dummies offers a broad look at both VR and AR, giving you a bird's eye view of what you can expect as they continue to take the world by storm.

Keeps you up-to-date on the pulse of this fast-changing technology; Explores the many ways AR/VR are being used in fields such as healthcare, education, and entertainment; Includes interviews with designers, developers, and technologists currently working in the fields of VR and AR.

Augmented reality (AR) offers a live direct or indirect view of a physical, real-world environment, where the elements and surroundings are augmented by computer-generated sensory input such as graphics and GPS data. It makes a game more real. Your social media app puts you where want to be or go. Pro Android Augmented Reality walks you t...

Virtualization has become a &quot;megatrend&quot; - and for good reason. Implementing virtualization allows for more efficient utilization of network server capacity, simpler storage administration, reduced energy costs, and better use of corporate capital. In other words: virtualization helps you save money, energy, and space. No...

Apple's Logic Pro X levels the playing field, making high-quality studio recordings accessible for any musician. It's a professional-level tool with a user-friendly interface and loads of new features to keep you more organized so you can focus on creating rather than computing. Record live audio and MIDI tracks and edit faster with the n...

Blender For Dummies is the quick and easy guide to learning 3D modeling and animation using the popular, free, open source Blender software. You'll learn how to create models, animate movement, and render well-lit scenes as you master the powerful features that rival the more expensive professional animation software. This third edition i...

Logic Pro X offers Mac users the tools and power they need to create recordings ready to share with the world. This book provides the know-how for navigating the interface, tweaking the settings, picking the sounds, and all the other tech tasks that get in the way of capturing the perfect take. Written by a Logic Pro X trainer who's used ...