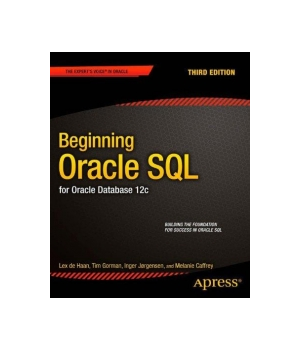 Beginning Oracle SQL is your introduction to the interactive query tools and specific dialect of SQL used with Oracle Database. These tools include SQL*Plus and SQL Developer. SQL*Plus is the one tool any Oracle developer or database administrator can always count on, and it is widely used in creating scripts to automate routine tasks. SQL Developer is a powerful, graphical environment for developing and debugging queries.

Oracle's is possibly the most valuable dialect of SQL from a career standpoint. Oracle's database engine is widely used in corporate environments worldwide. It is also found in many government applications. Oracle SQL implements many features not found in competing products. No developer or DBA working with Oracle can afford to be without knowledge of these features and how they work, because of the performance and expressiveness they bring to the table.

Beginning T-SQL is a performance-oriented introduction to the T-SQL language underlying the Microsoft SQL Server database engine. T-SQL is essential in writing SQL statements to get data into and out of a database. T-SQL is the foundation for business logic embedded in the database in the form of stored procedures and functions. Beginning...

Beginning Oracle SQL is your introduction to the interactive query tools and specific dialect of SQL used with Oracle Database. The book is a revision of the classic Mastering Oracle SQL and SQL*Plus by Lex de Haan, and has been updated to cover developments in Oracle's version of the SQL query language. Written in an easygoing and exampl...

Whether you're new to Oracle or an old hand who's yet to test the waters of APEX, Beginning Oracle Application Express 5 introduces the processes and best practices you'll need to become proficient with APEX. The book shows off the programming environment, the utilities and tools available, and then continues by walking through the proces...

Beginning Oracle PL/SQL gets you started in using the built-in language that every Oracle developer and database administrator must know. Oracle Database is chock-full of built-in application features that are free for the using, and PL/SQL is your ticket to learning about and using those features from your own code. With it, you can cent...

Beginning Hibernate, 3rd Edition is ideal if you're experienced in Java with databases (the traditional, or &quot;connected,&quot; approach), but new to open-source, lightweight Hibernate, a leading object-relational mapping and database-oriented application development framework.This book packs in information about the release of...

Updated for the latest database management systems, this introductory guide will get you up and running with SQL quickly. Whether you need to write database applications, perform administrative tasks, or generate reports, Learning SQL, Second Edition, will help you easily master all the SQL fundamentals. Each chapter presents a self-conta...