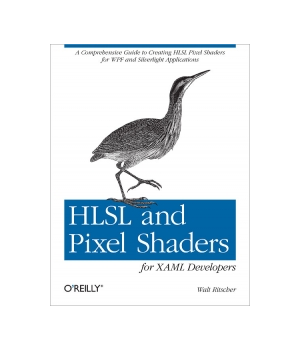 Graphic Shaders are used throughout the game and movie industry to improve onscreen graphics. They are versatile, doing important tasks like making computer rendered aliens look realistic, providing the ripples on a background lake or growing fur on the latest Pixar monster. In the PC world, programmers are often delighted to find that shaders are nothing more than a miniature program that is optimized to run on the computers GPU. This happiness fades when they start exploring the strange programming model underlying shaders however. Because shaders are strung together in an unusual fashion and run on a massive parallel processer developers shouldn't use their traditional OO or procedural approach to writing code. Writing effective shaders requires a mind shift regarding how to craft a useful algorithm. To top it off, shaders are written in a unfamiliar C-like language. In the Microsoft DirectX world the dominant language is High Level Shader Language or HLSL.

It's time to stop thinking that shaders are magical. You can use shaders to turn data into stunning visual effects, and get your hands dirty by building your own shader with this step-by-step introduction to shader development for game and graphics developers. Learn how to make shaders that move, tint, light up, and look awesome, all with...

Software development today is embracing functional programming (FP), whether it's for writing concurrent programs or for managing Big Data. Where does that leave Java developers? This concise book offers a pragmatic, approachable introduction to FP for Java developers or anyone who uses an object-oriented language.Dean Wampler, Java exper...

In HTML5 Guidelines for Web Developers, two pioneering web developers provide a comprehensive guide to HTML5's powerful new elements and techniques through compact, practical, easy-to-understand examples. You'll discover just how much you can do with HTML5 - from programming audio/video playback to integrating geographical data into pages...

Migrating to iPhone and iPad for .NET Developers

Migrating to iPhone and iPad for .NET Developers helps .NET programmers get started creating iPhone and iPad apps using the iOS software development kit. Start with a crash course on development using iOS. Then, find out whether you want to use Xcode instead of Visual Studio, and prepare yourself for the migration from C# to Objective-C! ...