From Novice to Professional 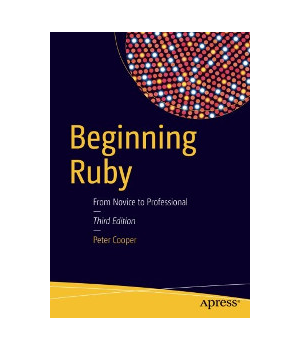 Based on the bestselling first and second editions, Beginning Ruby, 3rd Edition is a leading guide to learn Ruby from the ground up. The new edition of this book provides the same excellent introduction to Ruby as the previous editions plus updates for the newest version of Ruby 2.3 which includes new garbage collection support of symbol type objections, a new incremental garbage collector, memory management, vfork(2) with system and spawn functions and much more. This book can also be used as a textbook or companion to a textbook on beginning Ruby programming.

The light and agile Ruby programming language remains a very popular open source scripting option for developers building today's web and even some enterprise applications. And, now, Ruby also has applications using the Raspberry Pi, popular among hobbyists and makers. Many former Java developers still use Ruby on Rails today, the most popular framework for building Ruby applications.

Beginning Hibernate, 3rd Edition is ideal if you're experienced in Java with databases (the traditional, or &quot;connected,&quot; approach), but new to open-source, lightweight Hibernate, a leading object-relational mapping and database-oriented application development framework.This book packs in information about the release of...

The Well-Grounded Rubyist, 3rd Edition is a beautifully written tutorial that begins with your first Ruby program and takes you all the way to sophisticated topics like reflection, threading, and recursion. Ruby masters David A. Black and Joe Leo distill their years of knowledge for you, concentrating on the language and its uses so you c...

Have you thought about building games for your cell phone or other wireless devices? Whether you are a first-time wireless Java developer, or an experienced professional Beginning J2ME, Third Edition brings exciting wireless and mobile Java application development right to your door!This book will empower you with numerous topics: sound H...

Millions of Windows users have turned to Windows For Dummies for quick, friendly, and easy-to-understand help with their computers. Windows 10 For Dummies, 3rd Edition continues this tradition as it helps you navigate the twists and turns of Windows. Start at the beginning to discover the basics of the Windows interface or flip to later c...

In today's time-crunched, cost-conscious global business environment, tight project deadlines and stringent expectations are the norm. Now with 25% new and updated content, Project Management For Dummies, 3rd Edition introduces you to the principles of successful project management and shows you how to motivate any team to gain maximum pr...