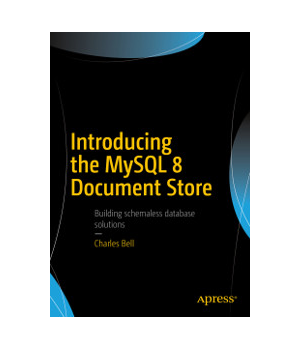 Learn the new Document Store feature of MySQL 8 and build applications around a mix of the best features from SQL and NoSQL database paradigms. Don't allow yourself to be forced into one paradigm or the other, but combine both approaches by using the Document Store.
MySQL 8 was designed from the beginning to bridge the gap between NoSQL and SQL. Oracle recognizes that many solutions need the capabilities of both. More specifically, developers need to store objects as loose collections of schema-less documents, but those same developers also need the ability to run structured queries on their data. With MySQL 8, you can do both!â€ƒIntroducing the MySQL 8 Document Store presents new tools and features that make creating a hybrid database solution far easier than ever before. This book covers the vitally important MySQL Document Store, the new X Protocol for developing applications, and a new client shell called the MySQL Shell. Also covered are supporting technologies and concepts such as JSON, schema-less documents, and more. The book gives insight into how features work and how to apply them to get the most out of your MySQL experience.

Identify, analyze, and improve poorly performing queries that damage user experience and lead to lost revenue for your business. This book will help you make query tuning an integral part of your daily routine through a multi-step process that includes monitoring of execution times, identifying candidate queries for optimization, analyzin...

Set up, manage, and configure the new InnoDB Cluster feature in MySQL from Oracle. If you are growing your MySQL installation and want to explore making your servers highly available, this book provides what you need to know about high availability and the new tools that are available in MySQL 8.0.11 and later.Introducing InnoDB Cluster t...

Build interactive, database-driven websites with PHP 7, MySQL 8, and MariaDB. The focus of this book is on getting you up and running as quickly as possible with real-world applications. In the first two chapters, you will set up your development and testing environment, and then build your first PHP and MariaDB or MySQL database-driven w...

Move data back and forth between database and application. The must-have knowledge in this book helps programmers learn how to use the official driver, MySQL Connector/Python, by which Python programs communicate with the MySQL database. This book takes you from the initial installation of the connector through basic query execution, then...

MySQL has introduced a Plugin API with its latest version - a robust, powerful, and easy way of extending the server functionality with loadable modules on the fly. But until now anyone wishing to develop a plugin would almost certainly need to dig into the MySQL source code and search the Web for missing bits of the information.This is t...

If you're a beginning developer, there's no better place to get up to speed on the Windows 8 SDK than this Wrox guide. A team of Microsoft experts provides a complete course in Windows 8 programming, helping you take full advantage of the innovative new SDK. Written in an easy-to-read style, this book is packed with reusable examples that...

It is an exciting time to be a Windows developer. The arrival of Windows 8 is a complete game changer. The operating system and its development platform offer you an entirely new way to create rich, full-featured Windows-based applications. This team of authors takes you on a journey through all of the new development features of the Wind...