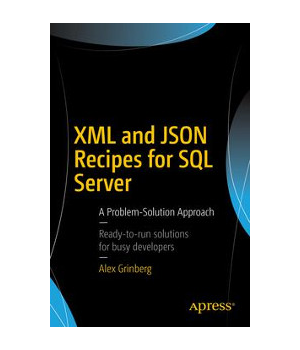 Quickly find solutions to dozens of common problems encountered while using XML and JSON features that are built into SQL Server. Content is presented in the popular problem-solution format. Look up the problem that you want to solve. Read the solution. Apply the solution directly in your own code. Problem solved!

This book shows how to take advantage of XML and JSON to share data and automate tasks. JSON is commonly used to move data back and forth between the database and front-end applications, often running in a browser. This book shows all you need to know about transforming query results into JSON format, and back again. Also covered are the processes and techniques for moving data into and out of XML format for business intelligence and other purposes, such as when transferring data from a reporting system into a data warehouse, or between different database brands such as between SQL Server and Oracle.

Microsoft intensively implements XML in SQL Server, and in many related products. Execution plans are generated in XML format, and this book shows you how to parse those plans and automate the detection of performance problems. The relatively new Extended Events feature writes tracing data into XML files, and the recipes in this book help in parsing those files.

XML is also used in SQL Server's BI tool set, including in SSIS, SSR, and SSAS. XML is used in many configuration files, and is even behind the construction of DDL triggers. In reading this book you'll dive deeply into the features that allow you to build and parse XML, and also JSON, which is a specific format of XML used to transmit objects in a web-friendly format between a database and its front-end applications.

by Peter A. Carter

Deliver advanced functionality faster and cheaper by exploiting SQL Server's ever-growing amount of built-in support for modern data formats. Learn about the growing support within SQL Server for operations and data transformations that have previously required third-party software and all the associated licensing and development costs. B...

Master SQL Server's Concurrency Model so you can implement high-throughput systems that deliver transactional consistency to your application customers. This book explains how to troubleshoot and address blocking problems and deadlocks, and write code and design database schemas to minimize concurrency issues in the systems you develop.SQ...

A Developer's Guide to Data Modeling for SQL Server

Effective data modeling is essential to ensuring that your databases will perform well, scale well, and evolve to meet changing requirements. However, if you're modeling databases to run on Microsoft SQL Server 2008 or 2005, theoretical or platform-agnostic data modeling knowledge isn't enough: models that don't reflect SQL Server's uniqu...

Be guided through the techniques to back up and restore databases and files in SQL Server. Multiple techniques are presented for ensuring the integrity and consistency of database backups, as well as the reliability and manageability of restoring from backups. In today's data-driven world, the most important asset that a company has is it...

Take a deep dive into the many uses of dynamic SQL in Microsoft SQL Server. This edition has been updated to use the newest features in SQL Server 2016 and SQL Server 2017 as well as incorporating the changing landscape of analytics and database administration. Code examples have been updated with new system objects and functions to impro...