with GameMaker Studio 2 and NodeJS 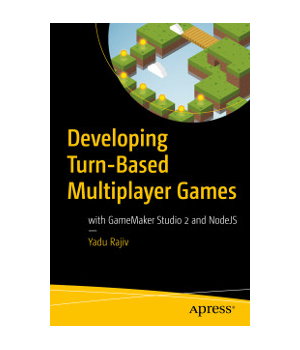 Create your first turn-based multiplayer game using GameMaker Studio 2's built-in networking functions as well as using a simple NodeJS server. This book introduces you to the complexities of network programming and communication, where the focus will be on building the game from the ground up. You will start with a brief introduction to GameMaker Studio 2 and GML coding before diving into the essential principles of game design.

Following this, you will go through an introductory section on NodeJS where you will learn how to create a server and send and receive data from it as well as integrating it with GameMaker Studio. You will then apply multiplayer gaming logic to your server and unlock multiplayer game features such as locating a player, syncing their data, and recording their session.

Networked multiplayer games are a multibillion dollar business: some games now attract tens of millions of players. In this practical, code-rich guide, Joshua Glazer and Sanjay Madhav guide you through every aspect of engineering them. Drawing on their immense experience as both game developers and instructors, the authors lead you throug...

Practical Android 4 Games Development continues your journey to becoming a hands-on Android game apps developer. This title guides you through the process of designing and developing game apps that work on both smartphones and tablets, thanks to the new Android SDK 4.0 which merges the User Interface and Experience APIs and more.From 2D-b...

Activiti is a light-weight workflow and Business Process Management (BPM) platform targeted at business people, developers, and system administrators. Its core is a super-fast and rock-solid BPMN 2 process engine for Java. Activiti runs in any Java application on a server, cluster and in the cloud. It integrates perfectly with Spring and ...

ImpactJS is a JavaScript library specially geared towards building 2-dimensional games. It is intuitive and versatile and allows the game developer to get results in no time while keeping an easy overview when games grow more complex. Games built with ImpactJS can be published on websites and even as an app on both Android and iOS.With HT...

This guide is an introduction to developing microservices-based applications and managing them using containers. It discusses architectural design and implementation approaches using .NET Core and Docker containers. To make it easier to get started with containers and microservices, the guide focuses on a reference containerized and micro...

Your hands-on, step-by-step guide to the programming fundamentals for Windows Azure. Teach yourself how to build and host scalable applications in the cloud using Windows Azure - one step at a time. Ideal for those with basic programming skills, this tutorial provides practical, learn-by-doing exercises for working with the core services ...

This short book provides a practical introduction to HTML5. HTML (HyperText Markup Language) is the predominant language of web pages. Originally developed as a way to describe and share scientific papers, HTML is now used to mark up all sorts of documents and create visual interfaces for browser-based software.With HTML5, however, HTML h...

Pro Access 2010 Development is a fundamental resource for developing business applications that take advantage of the features of Access 2010 and the many sources of data available to your business. In this book, you'll learn how to build database applications, create Web-based databases, develop macros and Visual Basic for Applications (...