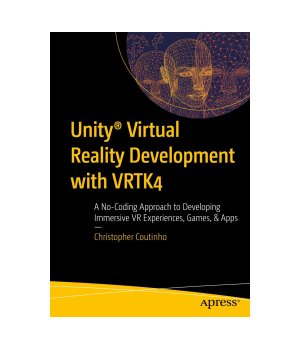 Get hands-on practical knowledge of concepts and techniques for VR development using Unity and VRTK version 4. This book is a step-by-step guide to learning VRTK 4 for developing immersive VR experiences.

Unity is a powerful game engine for developing VR experiences. With its built-in support for all major VR headsets, it's the perfect tool for developers to realize their vision in VR. VRTK is a battle-tested VR solution for Unity; VRTK 4, in conjunction with Unity, has changed the dynamics of VR development.

This book focuses on creating deep understanding of how advanced VR mechanics and techniques are built and utilized as a part of a VR framework. You will start off by setting up your devices for VR development and learn about the advantages of using VRTK 4 over alternate SDKs. You will learn to setup your very own custom VRTK Rig, find out how to setup various advanced VR mechanics and locomotion techniques, how to create several spatial UI objects, and how to setup Unity 2D UI controls. You will also cover advanced topics such as using angular and linear drives, setting up a VR Simulator to work with a XBox Controller, and realistic physics VR hands.

By the end of this book, you will know how to create advanced VR mechanics that can be used within any VR experience, game, or App and deployed across several platforms and hardware.

What is consumer "virtual reality"? Wearing a head-mounted display you view stereoscopic 3D scenes. You can look around by moving your head, and walk around using hand controls or motion sensors. You are engaged in a fully immersive experience. On the other hand, Unity is a powerful game development engine that provides a rich s...

Unity is the most exciting and popular engine used for developing games. With its 2018 release, Unity has become the primary source of both game development and virtual reality content.In Unity 2018 By Example, you'll learn how to use Unity in order to make amazing games from popular genres - from action shooters to mind-bending puzz...

Angular 2 Development with Typescript teaches you what you need to start using Angular, while you also learn TypeScript and how to take advantage of its benefits.Whether you're building web clients or full-featured SPAs, using the Angular 2 web framework is a liberating experience. Its declarative style makes it easy to define and ad...

Virtual reality has quite a lot of demand in computer science today and OpenSceneGraph, being one of the best 3D graphics toolkits, is being used widely. Although you can use the powerful OpenSceneGraph, based on the low-level OpenGL API, to implement virtual-reality applications that simulate different environments in the 3D world, devel...

Virtual Reality (VR) and Augmented Reality (AR) are driving the next technological revolution. If you want to get in on the action, this book helps you understand what these technologies are, their history, how they're being used, and how they'll affect consumers both personally and professionally in the very near future.With VR...