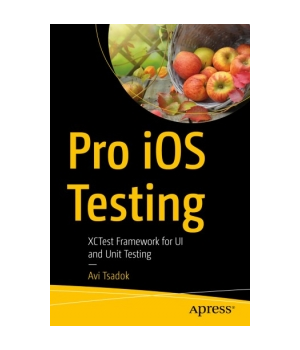 Discover what tools there are for unit testing in iOS, and how to work in a test-driven environment. This book reveals how testing is a crucial capability in any iOS developer's toolset, and a minimum requirement in iOS interviews.
A few years ago, tests on mobile platforms were not very popular. It wasn't a technical constraint, more a cultural one. But these days it's a crucial skill set, especially when projects become big and hard to maintain. This book shows you how to set up a testing target in XCode unit tests. You'll learn how to write unit tests properly and incorporate concepts like spies and mocks and code coverage. You'll also learn the philosophy behind the architecture of UI tests, and how to mock network and DB layers in testing. Write unbreakable UI tests performance tests, as well. And learn the difference between integration tests and snapshot testing.

This book will show you how to maintain code that's not only bug-free but will also remain high quality over time and maintainable while you make changes and refactors during an app's life. Testing in all its aspects is the best way of maintaining iOS projects to run fast and reliably long after you've released them.

Many iOS developers working today lack an understanding of the advantages of testing, and might be unfamiliar with tools that make the job easier, such as XCTest framework. With Pro iOS Testing you'll see how to develop and test apps that work and stay working for a long time.

Pro iOS Continuous Integration teaches you how to utilize the strengths of continuous integration in your everyday work. CI is more popular now than ever, as iOS developers realize how time-consuming building and deploying an application for testing purposes and quality assurance can be. This book shows you how to make your developing lif...

Property-based testing helps you create better, more solid tests with little code. By using the PropEr framework in both Erlang and Elixir, this book teaches you how to automatically generate test cases, test stateful programs, and change how you design your software for more principled and reliable approaches. You will be able to better ...

With Pro iOS Web Design and Development, you'll design websites and develop web applications for iPhone and iPad using web standards deployed with Apple's Safari browser.Utilizing the very latest web and mobile technologies and releases, this book shows every web professional how to use HTML5 to do the heavy lifting, CSS3 to create the lo...

If you're an iOS app developer, chances are you'll be using table views in your development projects. Table views are the bread and butter of iOS apps. With them, you can create everything from the simplest of lists to fully tricked-out user interfaces.Pro iOS Table Views takes a task-oriented focus to assist you when implementing customi...

Deepen your app development skills with Pro iOS Geo. This book shows you how to use geolocation-based tools to enhance the iOS apps you develop. Author Giacomo Andreucci describes different ways to integrate geo services, depending on the kind of app you're looking to develop: a web app, a hybrid app, or a native app. You'll discover how ...

Pro iOS Persistence explains how to build apps in Objective-C and Swift that persist and use data most effectively including the popular Core Data framework. Covering common and advanced persistence patterns, this book prepares any iOS developer to store and retrieve data accurately and efficiently.This book starts by giving you a solid g...

Get a solid grounding in all the fundamentals of Cocoa Touch, and avoid problems during iPhone and iPad app development. With Programming iOS 4, you'll dig into Cocoa and learn how to work effectively with Objective-C and Xcode. This book covers iOS 4 in a rigorous, orderly fashion - ideal whether you're approaching iOS for the first time...

Examine how to keep iOS devices safe in the physical world, including creating company policies for iPhones; assessing and defending against cyber vulnerabilities and attacks; working with preinstalled as well as third party tools; and strategies for keeping your data safe including backing up and screen locks.Managing and maintaining iPh...