A Foundation for C Programmers 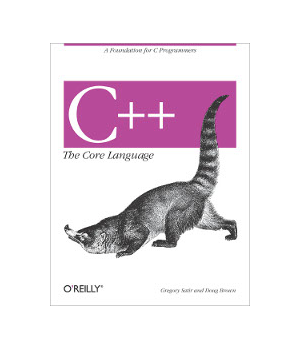 C++ is an object-oriented enhancement of the C programming language and is becoming the language of choice for serious software development. C++ has crossed the Single Book Complexity Barrier. The individual features are not all that complex, but when put together in a program they interact in highly non-intuitive ways. Many books discuss each of the features separately, giving readers the illusion that they understand the language. But when they try to program, they're in for a painful surprise. C++: The Core Language is for C programmers transitioning to C++. It's designed to get readers up to speed quickly by covering an essential subset of the language. The subset consists of features without which it's just not C++, and a handful of others that make it a reasonably useful language. You can actually use this subset (using any compiler) to get familiar with the basics of the language. Once you really understand that much, it's time to do some programming and learn more from other books. After reading this book, you'll be far better equipped to get something useful out of a reference manual, a graphical user interface programming book, and maybe a book on the specific libraries you'll be using. C++: The Core Language includes sidebars that give overviews of all the advanced features not covered, so that readers know they exist and how they fit in. It covers features common to all C++ compilers, including those on UNIX, Windows NT, Windows, DOS, and Macintosh.

C++/CLI is Microsofts latest extension to C++ that targets the heart of .NET 2.0, the common language runtime. Expert Visual C++/CLI is written by visual C++ MVP Marcus Heege, who examines the core of the C++/CLI language. He explains both how the language elements work and how Microsoft intends them to be used.Even if you're new to C++/C...

Bestselling Programming Tutorial and Reference Completely Rewritten for the New C++11 Standard.Fully updated and recast for the newly released C++11 standard, this authoritative and comprehensive introduction to C++ will help you to learn the language fast, and to use it in modern, highly effective ways. Highlighting today's best practice...

Looking for a reliable way to learn how to program on your own, without being overwhelmed by confusing concepts? Head First Programming introduces the core concepts of writing computer programs - variables, decisions, loops, functions, and objects - which apply regardless of the programming language. This book offers concrete examples and...

SFML is a cross-platform, object-oriented multimedia API that is written in C++. It provides a simple interface to ease the development of games and multimedia applications.This book will guide you through everything you need to know about building a 2D game in SFML. Concepts such as Sprites, Textures, Animation, and Cameras are explored ...

What if you could condense Java down to its very best features and build better applications with that simpler version? In this book, veteran Sun Labs engineer Jim Waldo reveals which parts of Java are most useful, and why those features make Java among the best programming languages available.Every language eventually builds up crud, Jav...

JavaScript: The Definitive Guide has been the bible for JavaScript programmers-a programmer's guide and comprehensive reference to the core language and to the client-side JavaScript APIs defined by web browsers.The 6th edition covers HTML5 and ECMAScript 5. Many chapters have been completely rewritten to bring them in line with today's b...

Python Algorithms, 2nd Edition explains the Python approach to algorithm analysis and design. Written by Magnus Lie Hetland, author of Beginning Python, this book is sharply focused on classical algorithms, but it also gives a solid understanding of fundamental algorithmic problem-solving techniques.The book deals with some of the most im...