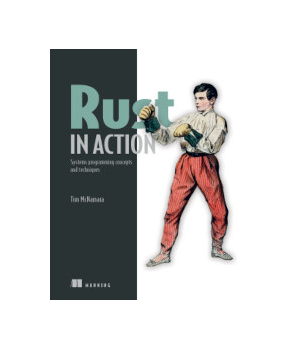 Rust in Action introduces the Rust programming language by exploring numerous systems programming concepts and techniques. You'll be learning Rust by delving into how computers work under the hood. You'll find yourself playing with persistent storage, memory, networking and even tinkering with CPU instructions. The book takes you through using Rust to extend other applications and teaches you tricks to write blindingly fast code. You'll also discover parallel and concurrent programming. Filled to the brim with real-life use cases and scenarios, you'll go beyond the Rust syntax and see what Rust has to offer in real-world use cases.

Rust is the perfect language for systems programming. It delivers the low-level power of C along with rock-solid safety features that let you code fearlessly. Ideal for applications requiring concurrency, Rust programs are compact, readable, and blazingly fast. Best of all, Rust's famously smart compiler helps you avoid even subtle coding errors.

Rust in Action is a hands-on guide to systems programming with Rust. Written for inquisitive programmers, it presents real-world use cases that go far beyond syntax and structure. You'll explore Rust implementations for file manipulation, networking, and kernel-level programming and discover awesome techniques for parallelism and concurrency. Along the way, you'll master Rust's unique borrow checker model for memory management without a garbage collector.

Rails is a full-stack, open source web framework powered by Ruby. Now in version 4, Rails is mature and powerful, and to use it effectively you need more than a few Google searches. You'll find no substitute for the guru's-eye-view of design, testing, deployment, and other real-world concerns that this book provides.Rails 4 in A...

OSGi is a Java-based framework for creating applications as a set of interconnected modules. OSGi lets you install, start, stop, update, or uninstall modules at execution time without taking down your entire system. It's the backbone of the Eclipse plugin system, as well as many Java EE containers, such as GlassFish, Geronimo, and We...