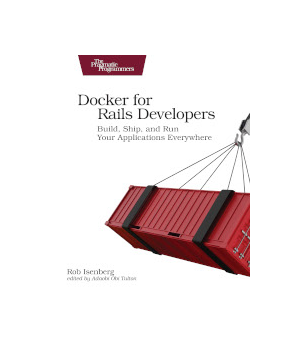 Docker does for DevOps what Rails did for web development - it gives you a new set of superpowers. Gone are â€œworks on my machineâ€ woes and lengthy setup tasks, replaced instead by a simple, consistent, Docker-based development environment that will have your team up and running in seconds. Gain hands-on, real-world experience with a tool that's rapidly becoming fundamental to software development. Go from zero all the way to production as Docker transforms the massive leap of deploying your app in the cloud into a baby step.

Docker makes life as a Ruby and Rails developer easier. It helps build, ship, and run your applications, solving major problems you face every day. It allows you to run applications at scale, adding new resources as needed. Docker provides a reliable, consistent environment that's guaranteed to work the same everywhere.

Docker lets you do all things DevOps without needing a PhD in infrastructure and operations. Want to spin up a cluster to run your app? No problem. Scale it up or down at will? You bet. Start by running a Ruby script without having Ruby installed on the local machine. Then Dockerize a Rails application and run it using containers, including creating your own custom Docker images tailored for running Rails apps. Describe your app declaratively using Docker Compose, specifying the software dependencies along with everything needed to run the application. Then set up continuous integration, as well as your deployment pipeline and infrastructure. Along the way, find out the best practices for using Docker in development and production environments.

This book gives you a solid foundation on using Docker and fitting it into your development workflow and deployment process.

Bootstrap is a free, open source CSS and JS framework that helps you create websites in minutes, and Ruby on Rails, or Rails as it's known, is an open source web application framework written in the Ruby programming language. Bootstrap is typically used in Rails applications to design websites and create themes because it comes loaded wit...

Are you a PHP developer interested in the Ruby on Rails framework? Rails for PHP Developers kick-starts your Rails experience by guiding you through learning both Ruby and Rails from a PHP developer's perspective. Written by developers with deep experience using PHP, Ruby, and Rails, this book leverages your existing knowledge of PHP to l...

Rails for .NET Developers introduces the joy of Ruby on Rails development to Microsoft .NET developers. This book demonstrates the essential elements of both the Ruby language and the Rails application framework, geared especially for developers already fluent in the Microsoft .NET platform....

In HTML5 Guidelines for Web Developers, two pioneering web developers provide a comprehensive guide to HTML5's powerful new elements and techniques through compact, practical, easy-to-understand examples. You'll discover just how much you can do with HTML5 - from programming audio/video playback to integrating geographical data into pages...

Software development today is embracing functional programming (FP), whether it's for writing concurrent programs or for managing Big Data. Where does that leave Java developers? This concise book offers a pragmatic, approachable introduction to FP for Java developers or anyone who uses an object-oriented language.Dean Wampler, Java exper...

There is a hidden revolution going on: geography is moving from niche to the mainstream. GIS for Web Developers introduces Geographic Information Systems (GIS) in simple terms and demonstrates hands-on uses. With this book, you'll explore popular websites like maps.google.com, see the technologies they use, and learn how to create your ow...