Build Your Functional Skills One Idea at a Time 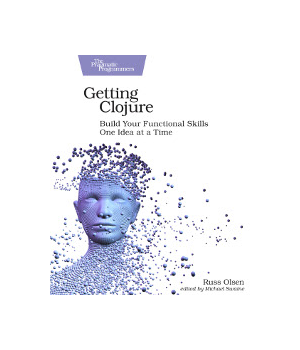 Behind every programming language lies a vision of how programs should be built. The vision behind Clojure is of a radically simple language framework holding together a sophisticated collection of programming features. Learning Clojure involves much more than just learning the mechanics of the language. To really get Clojure you need to understand the ideas underlying this structure of framework and features. You need this book: an accessible introduction to Clojure that focuses on the ideas behind the language as well as the practical details of writing code.

Clojure attracts developers on the cutting edge and is arguably the best language for learning to program in the functional style without compromise. But this comes with a steep learning curve. Getting Clojure directly addresses this by teaching you how to think functionally as it teaches you the language. You'll learn about Clojure's powerful data structures and high-level functions, but you'll also learn what it means for a language to be functional, and how to think in Clojure's functional way.

Each chapter of Getting Clojure takes a feature or two or three from the language, explains the syntax and the mechanics behind that feature so that you can make it work before digging into the deeper questions: What is the thinking behind the feature? And how does it fit in with the rest of the language? In Getting Clojure you'll learn Clojure's very simple syntax, but you'll also learn why that syntax is integral the way the language is constructed. You'll discover that most data structures in Clojure are immutable, but also why that leads to more reliable programs. And you'll see how easy it is to write Clojure functions and also how you can use those functions to build complex and capable systems.

With real-world examples of how working Clojure programmers use the language, Getting Clojure will help you see the challenges of programming through the eye of experienced Clojure developers.

A short composition that provides practice material for a particular musical skill is called an etude. In this hands-on book, you'll find more than 30 etudes to help you practice ClojureScript skills for specific programming areas, ranging from functions and variables to asynchronous processing. Each of these small projects includes a des...

Data is everywhere and it's increasingly important to be able to gain insights that we can act on. Using Clojure for data analysis and collection, this book will show you how to gain fresh insights and perspectives from your data with an essential collection of practical, structured recipes.The Clojure Data Analysis Cookbook - presents r...

Clojure is a young, dynamic, functional programming language that runs on the Java Virtual Machine. It is built with performance, pragmatism, and simplicity in mind. Like most general purpose languages, Clojure's features have different performance characteristics that one should know in order to write high performance code.Clojure High P...

Getting Started with nopCommerce

nopCommerce is a powerful e-commerce engine that gives you the tools to build an online store and start making money. Starting your own e-commerce store can seem like a daunting task. However, with nopCommerce you can easily start selling products online in no time. nopCommerce comes loaded with everything you need to run a first class e-...

Clojure is a Lisp dialect built on top of the Java Virtual Machine. As data increasingly invades more and more parts of our lives, we continually need more tools to deal with it effectively. Data can be organized effectively using Clojure data tools.Mastering Clojure Data Analysis teaches you how to analyze and visualize complex datasets....

Reactive Programming (RP) is central to many concurrent systems. It endeavors to make the process of developing highly-concurrent, event-driven, and asynchronous applications simpler and less error-prone. RP comes in many flavors and we will look at some of them in this book.Clojure Reactive Programming is a practical guide aimed at explo...

Functional programming enables developers to create and deploy applications quickly and easily. Using the Clojure programming language and the Leiningen build tool, this book teaches you how to leverage various Clojure libraries into the building blocks of a web-based application.We'll start by generating a new, fully runnable, baseline w...