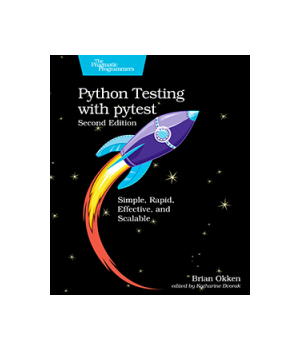 Test applications, packages, and libraries large and small with pytest, Python's most powerful testing framework. pytest helps you write tests quickly and keep them readable and maintainable. In this fully revised edition, explore pytest's superpowers - simple asserts, fixtures, parametrization, markers, and plugins - while creating simple tests and test suites against a small database application. Using a robust yet simple fixture model, it's just as easy to write small tests with pytest as it is to scale up to complex functional testing. This book shows you how.

With simple step-by-step instructions and sample code, this book gets you up to speed quickly on this easy-to-learn yet powerful tool. Write short, maintainable tests that elegantly express what you're testing. Speed up test times by distributing tests across multiple processors and running tests in parallel. Use Python's built-in assert statements instead of awkward assert helper functions to make your tests more readable. Move setup code out of tests and into fixtures to separate setup failures from test failures. Test error conditions and corner cases with expected exception testing, and use one test to run many test cases with parameterized testing. Extend pytest with plugins, connect it to continuous integration systems, and use it in tandem with tox, mock, coverage, and even existing unittest tests.

Practical Data Science with R, Second Edition takes a practice-oriented approach to explaining basic principles in the ever expanding field of data science. You'll jump right to real-world use cases as you apply the R programming language and statistical analysis techniques to carefully explained examples based in marketing, business...

Learn how to automate unit tests of Python 3 with automation libraries, such as doctest, unittest, nose, nose2, pytest, and selenium. This book explores important concepts in software test automation and demonstrates how to automate, organize, and execute unit tests with Python. It also introduces readers to the concepts of web browser au...

For Python-based projects, pytest is the undeniable choice to test your code if you're looking for a full-featured, API-independent, flexible, and extensible testing framework. With a full-bodied fixture model that is unmatched in any other tool, the pytest framework gives you powerful features such as assert rewriting and plug-in ca...

To achieve the maximum control and flexibility from Microsoft Excel often requires careful custom programming using the VBA (Visual Basic for Applications) language. Writing Excel Macros with VBA, 2nd Edition offers a solid introduction to writing VBA macros and programs, and will show you how to get more power at the programming level: f...

Deep Learning with R, 2nd Edition shows you how to put deep learning into action. It's based on the revised new edition of François Chollet's bestselling Deep Learning with Python. All code and examples have been expertly translated to the R language by Tomasz Kalinowski, who maintains the Keras and Tensorflow R packages at RSt...

Java Persistence with Hibernate, 2nd Edition explores Hibernate by developing an application that ties together hundreds of individual examples. You'll immediately dig into the rich programming model of Hibernate, working through mappings, queries, fetching strategies, transactions, conversations, caching, and more. Along the way you...

Pragmatic programmers use feedback to drive their development and personal processes. The most valuable feedback you can get while coding comes from unit testing. Now in it's second edition, Pragmatic Unit Testing in C# with NUnit, 2nd Ed. will show you how to do software unit testing, of course, but more importantly will show you wh...