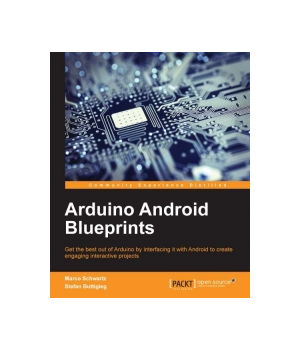 Arduino is an open source microcontroller built on a single-circuit board that is capable of receiving sensory input from the environment and controlling interactive physical objects.

The first few projects of this book will focus on displaying tweets within your app by connecting to Twitter, controlling basic functions of the Arduino board, and connecting an Arduino-powered weather station to an Android phone via Bluetooth. Next, you will learn how to use the Arduino YÃºn board to connect a standard USB camera to a local Wi-Fi network. At the end of the book, you will build a simple mobile robot, connect it to an Arduino board and a Bluetooth module, then control the robot from an Android phone using Bluetooth.

Each project is explained in a step-by-step fashion, always starting with the choice of components and the assembly of the hardware.

Jump into the world of Near Field Communications (NFC), the fast-growing technology that lets devices in close proximity exchange data, using radio signals. With lots of examples, sample code, exercises, and step-by-step projects, this hands-on guide shows you how to build NFC applications for Android, the Arduino microcontroller, and emb...

Arduino is an open source electronics prototyping platform for building a multitude of smart devices and gadgets. Developers can benefit from using Arduino in their projects because of the ease of coding, allowing you to build cool and amazing devices supported by numerous hardware resources such as shields in no time at all.Whether you'r...

Open locked doors using your smartphone. Assemble a bird feeder that posts Twitter tweets to tell you when the birds are feeding or when bird seed runs low. Have your home speak to you when you receive email, notify you when visitors arrive, and more.You'll learn how to use Android smartphones, Arduinos, X10 controllers and a wide array o...

Android Open Accessory is a new, simple, and secure protocol for connecting any microcontroller-empowered device to an Android smartphone or tablet. This Wrox guide shows Android programmers how to use AOA with Arduino, the microcontroller platform, to control such systems as lighting, air conditioning, and entertainment systems from Andr...

by Richard A. Rogers

The book starts with an up-to-the-minute overview of today's Android mobile games marketplace, reviews each leading genre, and teaches you the foundational concepts of game development. You'll design a simple game, then master every step of game development with AndEngine - the powerful, open source, free game-development engine. Every ch...

In this book, bestselling Android programming authors Lauren Darcey and Shane Conder teach you every skill and technique you need to write production-quality apps for Amazon Kindle Fire, the world's hottest Android tablet. You'll learn the very best way: by building a complete app from start to finish. Every chapter builds on what you've ...

This edition has been extensively updated to reflect the other Android 4.2.2 releases. You'll find all-new chapters on advanced threading and UI development, in-app billing, push messages, and native development, plus new techniques for everything from accessing NFC hardware to using Google Cloud Messaging.Proven modular recipes take you ...

This fully reworked edition of a proven title is the most useful real-world guide to building robust, commercial-grade Android™ apps. The content is revised and updated for the latest Android 4.3 SDK and the newest development best practices. Introduction to Android™ Application Development: Android Essentials, Fourth Edition,covers a...