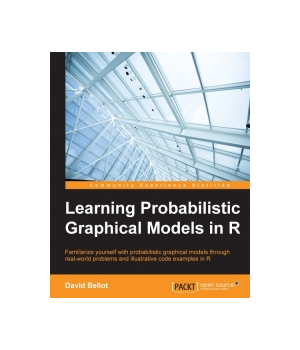 We'll start by showing you how to transform a classical statistical model into a modern PGM and then look at how to do exact inference in graphical models. Proceeding, we'll introduce you to many modern R packages that will help you to perform inference on the models. We will then run a Bayesian linear regression and you'll see the advantage of going probabilistic when you want to do prediction.

Next, you'll master using R packages and implementing its techniques. Finally, you'll be presented with machine learning applications that have a direct impact in many fields. Here, we'll cover clustering and the discovery of hidden information in big data, as well as two important methods, PCA and ICA, to reduce the size of big problems.

With the increasing prominence in machine learning and data science applications, probabilistic graphical models are a new tool that machine learning users can use to discover and analyze structures in complex problems. The variety of tools and algorithms under the PGM framework extend to many domains such as natural language processing, ...

Probabilistic graphical models is a technique in machine learning that uses the concepts of graph theory to concisely represent and optimally predict values in our data problems. Graphical models gives us techniques to find complex patterns in the data and are widely used in the field of speech recognition, information extraction, image s...

R is a versatile cross-platform environment with the power of a programming language and the flexibility of a scripting language. It is extremely powerful in manipulating and visualizing complex databases, performing statistical computations and producing any kind of plot with a very high graphical quality.Instant R Starter is a practical...

Examine the latest technological advancements in building a scalable machine-learning model with big data using R. This second edition shows you how to work with a machine-learning algorithm and use it to build a ML model from raw data. You will see how to use R programming with TensorFlow, thus avoiding the effort of learning Python if y...

Master the essential skills needed to recognize and solve complex problems with machine learning and deep learning. Using real-world examples that leverage the popular Python machine learning ecosystem, this book is your perfect companion for learning the art and science of machine learning to become a successful practitioner. The concept...

R is the most widely used programming language, and when used in association with data science, this powerful combination will solve the complexities involved with unstructured datasets in the real world. This book covers the entire data science ecosystem for aspiring data scientists, right from zero to a level where you are confident eno...