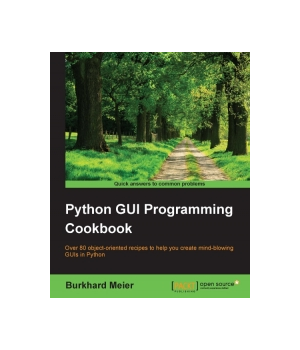 Python is a multi-domain, interpreted programming language. It is a widely used general-purpose, high-level programming language. It is often used as a scripting language because of its forgiving syntax and compatibility with a wide variety of different eco-systems. Its flexible syntax enables developers to write short scripts while at the same time, they can use object-oriented concepts to develop very large projects.

Python GUI Programming Cookbook follows a task-based approach to help you create beautiful and very effective GUIs with the least amount of code necessary. This book uses the simplest programming style, using the fewest lines of code to create a GUI in Python, and then advances to using object-oriented programming in later chapters. If you are new to object-oriented programming (OOP), this book will teach you how to take advantage of the OOP coding style in the context of creating GUIs written in Python.

PyQt is one of the best cross-platform interface toolkits currently available; it's stable, mature, and completely native. If you want control over all aspects of UI elements, PyQt is what you need. This book will guide you through every concept necessary to create fully functional GUI applications using PyQt, with only a few lines of cod...

Parallel programming techniques are required for a developer to get the best use of all the computational resources available today and to build efficient software systems. From multi-core to GPU systems up to the distributed architectures, the high computation of programs throughout requires the use of programming tools and software libr...

The Python 3 Standard Library is a vast array of modules that you can use for developing various kinds of applications. It contains an exhaustive list of libraries, and this book will help you choose the best one to address specific programming problems in Python.The Modern Python Standard Library Cookbook begins with recipes on container...

Today, data visualization is a hot topic as a direct result of the vast amount of data created every second. Transforming that data into information is a complex task for data visualization professionals, who, at the same time, try to understand the data and objectively transfer that understanding to others. This book is a set of practica...

Python Data Visualization Cookbook will progress the reader from the point of installing and setting up a Python environment for data manipulation and visualization all the way to 3D animations using Python libraries. Readers will benefit from over 60 precise and reproducible recipes that will guide the reader towards a better understandi...

Tkinter is the built-in GUI package that comes with standard Python distributions. It is a cross-platform package, which means you build once and deploy everywhere. It is simple to use and intuitive in nature, making it suitable for programmers and non-programmers alike.This book will help you master the art of GUI programming. It deliver...

This book highlights major aspects of network programming in Python starting from writing simple networking clients, to developing complex screen-scraping and network security monitoring scripts. It creates the building blocks for many practical web and networking applications that rely on various networking protocols. This book presents ...

Data analysis is a rapidly evolving field and Python is a multi-paradigm programming language suitable for object-oriented application development and functional design patterns. As Python offers a range of tools and libraries for all purposes, it has slowly evolved as the primary language for data science, including topics on: data analy...