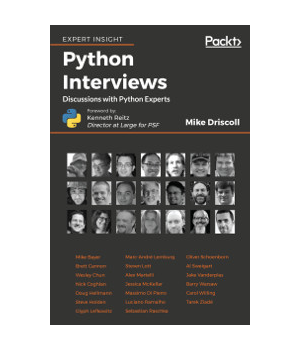 Hear from these key Python thinkers about the current status of Python, and where it's heading in the future; Listen to their close thoughts on significant Python topics, such as Python's role in scientific computing, and machine learning; Understand the direction of Python, and what needs to change for Python 4.

Each of these twenty Python Interviews can inspire and refresh your relationship with Python and the people who make Python what it is today. Let these interviews spark your own creativity, and discover how you also have the ability to make your mark on a thriving tech community. This book invites you to immerse in the Python landscape, and let these remarkable programmers show you how you too can connect and share with Python programmers around the world. Learn from their opinions, enjoy their stories, and use their tech tips.

Puzzle-based learning is an active learning technique. With code puzzles, you will learn faster, smarter, and better.Coffee Break Python Slicing is all about growing your Python expertise - one coffee at a time. The focus lies on the important slicing technique to access consecutive data ranges. Understanding slicing thoroughly is crucial...

It is more powerful, convenient, consistent, and expressive than ever before. Now, leading Python programmer Mark Summerfield demonstrates how to write code that takes full advantage of Python 3's features and idioms. Programming in Python 3, Second Edition, brings together all the knowledge you need to write any program, use any standard...

As an open source, object-oriented programming language, Python is easy to understand, extendable, and user-friendly. This book covers every aspect of Python so that you can get started writing your own programs with Python today. Author James Payne begins with the most basic concepts of the Python language - placing a special focus on th...

Portable, powerful, and a breeze to use, Python is the popular open source object-oriented programming language used for both standalone programs and scripting applications. It is now being used by an increasing number of major organizations, including NASA and Google.Updated for Python 2.4, The Python Cookbook, 2nd Edition offers a wealt...

This is the book to reach for when you're coding on the fly and need an answer now. It's an easy-to-use reference to the core language, with descriptions of commonly used modules and toolkits, and a guide to recent changes, new features, and upgraded built-ins -- all updated to cover Python 3.x as well as version 2.6. You'll also quickly ...

Python is an ideal language for solving problems, especially for Linux and Unix. With this pragmatic book, administrators can review various tasks that often occur in the management of these systems, and learn how Python can provide a more efficient way to handle them. Once you finish this book, you'll be able to develop your own set of c...

You will learn fundamentals like IP, TCP, DNS and SSL by using working Python programs; you will also be able to familiarize yourself with infrastructure components like memcached and message queues. You can also delve into network server designs, and compare threaded approaches with asynchronous event-based solutions.But the biggest chan...