Explore the methods and tools of ethical hacking with Kali Linux 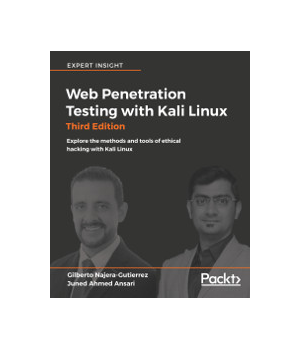 Web Penetration Testing with Kali Linux - 3rd Edition shows you how to set up a lab, helps you understand the nature and mechanics of attacking websites, and explains classical attacks in great depth. This edition is heavily updated for the latest Kali Linux changes and the most recent attacks. Kali Linux shines when it comes to client-side attacks and fuzzing in particular.

From the start of the book, you'll be given a thorough grounding in the concepts of hacking and penetration testing, and you'll see the tools used in Kali Linux that relate to web application hacking. You'll gain a deep understanding of classicalSQL, command-injection flaws, and the many ways to exploit these flaws. Web penetration testing also needs a general overview of client-side attacks, which is rounded out by a long discussion of scripting and input validation flaws.

There is also an important chapter on cryptographic implementation flaws, where we discuss the most recent problems with cryptographic layers in the networking stack.

The importance of these attacks cannot be overstated, and defending against them is relevant to most internet users and, of course, penetration testers.

At the end of the book, you'll use an automated technique called fuzzing to identify flaws in a web application. Finally, you'll gain an understanding of web application vulnerabilities and the ways they can be exploited using the tools in Kali Linux.

Kali Linux is built for professional penetration testing and security auditing. It is the next-generation of BackTrack, the most popular open-source penetration toolkit in the world. Readers will learn how to think like real attackers, exploit systems, and expose vulnerabilities.Even though web applications are developed in a very secure ...

Kali Linux 2.0 is the new generation of the industry-leading BackTrack Linux penetration testing and security auditing Linux distribution. It contains several hundred tools aimed at various information security tasks such as penetration testing, forensics, and reverse engineering.At the beginning of the book, you will be introduced to the...

Kali Linux is a Debian-based Linux distribution designed for digital forensics and penetration testing. It gives access to a large collection of security-related tools for professional security testing - some of the major ones being Nmap, Aircrack-ng, Wireshark, and Metasploit.This book will take you on a journey where you will learn to m...

As wireless networks become ubiquitous in our lives, wireless penetration testing has become a key skill in the repertoire of the professional penetration tester. The Kali Linux security distribution comes with a myriad of tools used for networking attacks and detecting security loopholes.Kali Linux Wireless Penetration Testing Beginner's...

Penetration Testing with the Bash shell

This book teaches you to take your problem solving capabilities to the next level with the Bash shell, to assess network and application level security by leveraging the power of the command-line tools available with Kali Linux.The book begins by introducing some of the fundamental bash scripting and information processing tools. Building...

Kali Linux is a comprehensive penetration testing platform with advanced tools to identify, detect, and exploit the vulnerabilities uncovered in the target network environment. With Kali Linux, you can apply the appropriate testing methodology with defined business objectives and a scheduled test plan, resulting in successful penetration ...