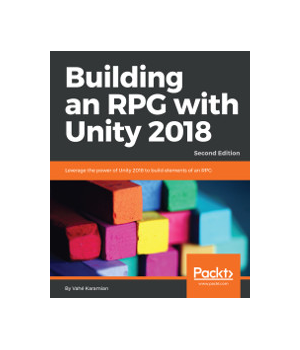 In a role-playing game (RPG), users control a character, usually in the game's imaginary universe. Unity has become a top choice for developers looking to create these kinds of immersive RPGs.

Building an RPG with Unity 2018, based on building some of the most common RPG features, teaches you tips, tricks, and techniques that can be applied to your own game.

To start with, the book guides you through the fundamentals of role-playing games. You will learn the necessary aspects of building an RPG, such as structuring the game environment, customizing characters, controlling the camera, and designing other attributes such as inventory and weapons. You will also explore designing game levels by adding more features. Once you have understood the bigger picture, you will understand how to tackle the obstacles of networking in Unity and implement multiplayer mode for your RPG games.

By the end of the book, you will be able to build upon the core RPG framework elements to create your own immersive games.

Interactive and engaging games come with intelligent enemies, and this intellectual behavior is combined with a variety of techniques collectively referred to as Artificial Intelligence. Exploring Unity's API, or its built-in features, allows limitless possibilities when it comes to creating your game's worlds and characters. This cookboo...

With the help of the Unity 2018 Cookbook, you'll discover how to make the most of the UI system and understand how to animate both 2D and 3D characters and game scene objects using Unity's Mecanim animation toolsets.Once you've got to grips with the basics, you will familiarize yourself with shaders and Shader Graphs, followed by understa...