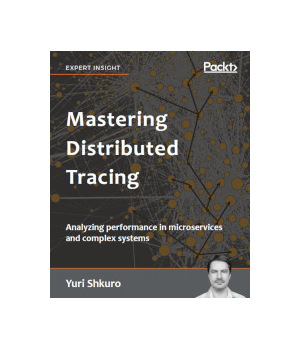 Mastering Distributed Tracing will equip you to operate and enhance your own tracing infrastructure. Through practical exercises and code examples, you will learn how end-to-end tracing can be used as a powerful application performance management and comprehension tool.

The rise of Internet-scale companies, like Google and Amazon, ushered in a new era of distributed systems operating on thousands of nodes across multiple data centers. Microservices increased that complexity, often exponentially. It is harder to debug these systems, track down failures, detect bottlenecks, or even simply understand what is going on. Distributed tracing focuses on solving these problems for complex distributed systems. Today, tracing standards have developed and we have much faster systems, making instrumentation less intrusive and data more valuable.

Yuri Shkuro, the creator of Jaeger, a popular open-source distributed tracing system, delivers end-to-end coverage of the field in Mastering Distributed Tracing. Review the history and theoretical foundations of tracing; solve the data gathering problem through code instrumentation, with open standards like OpenTracing, W3C Trace Context, and OpenCensus; and discuss the benefits and applications of a distributed tracing infrastructure for understanding, and profiling, complex systems.

Developing, deploying, and operating cloud applications should be as easy as local applications. This should be the governing principle behind any cloud platform, library, or tool. Spring Cloud - an open-source library - makes it easy to develop JVM applications for the cloud. In this book, you will be introduced to Spring Cloud and will ...

Git is one of the most popular types of Source Code Management (SCM) and Distributed Version Control System (DVCS). Despite the powerful and versatile nature of the tool enveloping strong support for nonlinear development and the ability to handle large projects efficiently, it is a complex tool and often regarded as "user-unfriendly...

A blockchain is a distributed ledger that is replicated across multiple nodes and enables immutable, transparent and cryptographically secure record-keeping of transactions. The blockchain technology is the backbone of cryptocurrencies, and it has applications in finance, government, media and almost all other industries. Mastering Blockc...

Modern data science solutions need to be clean, easy to read, and scalable. In Mastering Large Datasets with Python, author J.T. Wolohan teaches you how to take a small project and scale it up using a functionally influenced approach to Python coding. You'll explore methods and built-in Python tools that lend themselves to clarity and sca...

Storm is the most popular framework for real-time stream processing. Storm provides the fundamental primitives and guarantees required for fault-tolerant distributed computing in high-volume, mission critical applications. It is both an integration technology as well as a data flow and control mechanism, making it the core of many big dat...

ElasticSearch is fast, distributed, scalable, and written in the Java search engine that leverages Apache Lucene capabilities providing a new level of control over how you index and search even the largest set of data.Mastering ElasticSearch covers the intermediate and advanced functionalities of ElasticSearch and will let you understand ...

Mastering Embedded Linux Programming takes you through the product cycle and gives you an in-depth description of the components and options that are available at each stage. You will begin by learning about toolchains, bootloaders, the Linux kernel, and how to configure a root filesystem to create a basic working device. You will then le...