Leverage the power of shell scripts to solve real-world problems 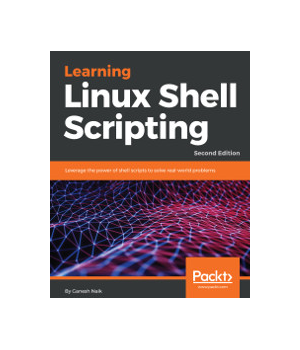 Linux is the most powerful and universally adopted OS. Shell is a program that gives the user direct interaction with the operating system. Scripts are collections of commands that are stored in a file. The shell reads this file and acts on commands as if they were typed on the keyboard.

Learning Linux Shell Scripting covers Bash, GNU Bourne Again Shell, preparing you to work in the exciting world of Linux shell scripting. CentOS is a popular rpm-based stable and secured Linux distribution. Therefore, we have used CentOS distribution instead of Ubuntu distribution. Linux Shell Scripting is independent of Linux distributions, but we have covered both types of distros. We start with an introduction to the Shell environment and basic commands used. Next, we explore process management in Linux OS, real-world essentials such as debugging and perform Shell arithmetic fluently. You'll then take a step ahead and learn new and advanced topics in Shell scripting, such as decision making, starting up a system, and customizing a Linux environment. You will also learn about grep, stream editor, and AWK, which are very powerful text filters and editors. Finally, you'll get to grips with taking backup, using other language scripts in Shell Scripts as well as automating database administration tasks for MySQL and Oracle.

By the end of this book, you will be able to confidently use your own shell scripts in the real world.

In this book, you'll discover everything you need to know to master shell scripting and make informed choices about the elements you employ.Grab your favorite editor and start writing your best Bash scripts step by step. Get to grips with the fundamentals of creating and running a script in normal mode, and in debug mode. Learn about vari...

UNIX expert Randal K. Michael guides you through every detail of writing shell scripts to automate specific tasks. Each chapter begins with a typical, everyday UNIX challenge, then shows you how to take basic syntax and turn it into a shell scripting solution. Covering Bash, Bourne, and Korn shell scripting, this updated edition provides ...

The shell remains one of the most powerful tools on a computer system - yet a large number of users are unaware of how much one can accomplish with it. Using a combination of simple commands, we will see how to solve complex problems in day to day computer usage.Linux Shell Scripting Cookbook, 2nd Edition will take you through useful real...

Shell scripting is a quick method to prototype a complex application or a problem by automating tasks when working on Linux-based systems. Using both simple one-line commands and command sequences complex problems can be solved with ease, from text processing to backing up sysadmin tools.In this book, you'll discover everything you need t...

Shell scripting is a quick method to prototype complex applications or problems. Shell scripts are a collection of commands to automate tasks, usually those for which the user has a repeated need, when working on Linux-based systems. Using simple commands or a combination of them in a shell can solve complex problems easily.This book star...

GNU/Linux is a remarkable operating system that comes with a complete development environment that is stable, reliable, and extremely powerful. The shell being the native interface to communicate with the operating system is capable of controlling the entire operating system. There are numerous commands on Linux shell which are documented...

This is Linux for those of us who don't mind typing. All Linux users and administrators tend to like the flexibility and speed of Linux administration from the command line in byte-sized chunks, instead of fairly standard graphical user interfaces. Beginning the Linux Command Line is verified against all of the most important Linux distri...

The explosive growth of digital data has boosted the demand for expertise in trading strategies that use machine learning (ML). This thoroughly revised and expanded 2nd edition enables you to build and evaluate sophisticated supervised, unsupervised, and reinforcement learning models.This edition introduces end-to-end machine learning for...