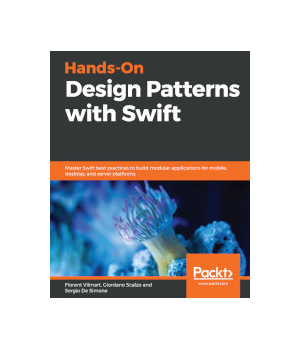 Swift keeps gaining traction not only amongst Apple developers but also as a server-side language. This book demonstrates how to apply design patterns and best practices in real-life situations, whether that's for new or already existing projects.

You'll begin with a quick refresher on Swift, the compiler, the standard library, and the foundation, followed by the Cocoa design patterns - the ones at the core of many cocoa libraries - to follow up with the creational, structural, and behavioral patterns as defined by the GoF. You'll get acquainted with application architecture, as well as the most popular architectural design patterns, such as MVC and MVVM, and learn to use them in the context of Swift. In addition, you'll walk through dependency injection and functional reactive programming. Special emphasis will be given to techniques to handle concurrency, including callbacks, futures and promises, and reactive programming. These techniques will help you adopt a test-driven approach to your workflow in order to use Swift Package Manager and integrate the framework into the original code base, along with Unit and UI testing.

By the end of the book, you'll be able to build applications that are scalable, faster, and easier to maintain.

React Native helps developers reuse code across different mobile platforms like iOS and Android.This book will show you effective design patterns in the React Native world and will make you ready for professional development in big teams.The book will focus only on the patterns that are relevant to JavaScript, ECMAScript, React and React ...

Get hands-on experience with each Gang of Four design pattern using C#. For each of the patterns, you'll see at least one real-world scenario, a coding example, and a complete implementation including output.In the first part of Design Patterns in C#, you will cover the 23 Gang of Four (GoF) design patterns, before moving onto some altern...

Building software requires careful planning and architectural considerations; Golang was developed with a fresh perspective on building next-generation applications on the cloud with distributed and concurrent computing concerns.Hands-On Software Architecture with Golang starts with a brief introduction to architectural elements, Go, and ...

Learn how to implement design patterns in Java: each pattern in Java Design Patterns is a complete implementation and the output is generated using Eclipse, making the code accessible to all. The examples are chosen so you will be able to absorb the core concepts easily and quickly.This book presents the topic of design patterns in Java i...

In over 20 years of existence, JavaScript has been pushing beyond the boundaries of web evolution with proven existence on servers, embedded devices, Smart TVs, IoT, Smart Cars, and more. Today, with the added advantage of machine learning research and support for JS libraries, JavaScript makes your browsers smarter than ever with the abi...

Implementing Machine learning (ML) and Artificial Intelligence (AI) in the cloud had not been possible earlier due to the lack of processing power and storage. However, Azure has created ML and AI services that are easy to implement in the cloud. Hands-On Machine Learning with Azure teaches you how to perform advanced ML projects in the c...

Bitcoin is a cryptocurrency that's changing the face of online payments. Hands-On Bitcoin Programming with Python teaches you to build software applications for mining and creating Bitcoins using Python.This book starts with the basics of both Bitcoin and blockchain and gives you an overview of these inherent concepts by showing you how t...